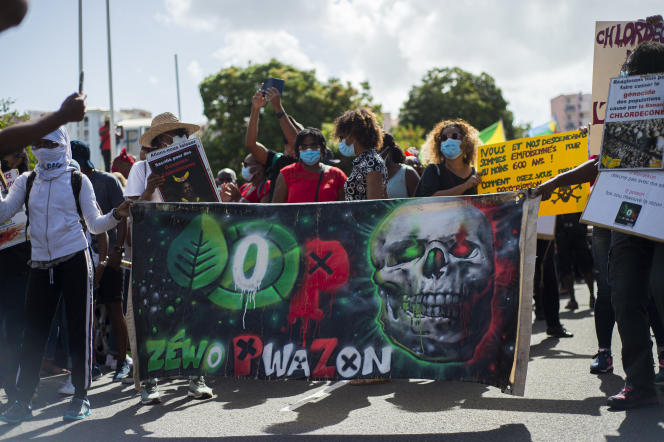 The Paris administrative court condemned the state for “wrongful negligence” in the case of chlordecone, used as a pest control in the Antilles, but rejected the plaintiffs’ claims for compensation for anxiety damage, in a decision obtained on Monday June 27 by Agence France-Presse.

“The State services have committed culpable negligence, by allowing the sale of the same antiparasitic specialty containing 5% chlordecone”, under various names, “by authorizing the continuation of sales beyond the legally provided deadlines in the event of of withdrawal of registration, “according to this decision issued on Friday.

Chlordecone, a pesticide banned in France in 1990 but which continued to be authorized in the banana fields of Martinique and Guadeloupe by ministerial derogation until 1993, caused significant and long-lasting pollution of the two islands. More than 90% of the adult population in Guadeloupe and Martinique is contaminated with chlordecone, according to Public Health France.

However, the administrative court considered that “with the exception of their presence in Martinique or Guadeloupe, for at least twelve months since 1973, the applicants do not mention any personal and detailed element allowing to justify the damage of anxiety on which they claim”. Accordingly, “the claims for compensation presented by the claimants must be rejected,” the judgment states.

In addition, according to the administrative court “the applicants are not justified in maintaining that the State would have delayed in the implementation of measures for the protection of the populations or that the information disseminated would have been contradictory”, adds the administrative court. For Me Christophe Lèguevaques, who represents the 1,240 applicants, this decision is, however, a “decisive step forward”.

“It can be used in the criminal case of chlordecone. While, until now, we had in front of us manufacturers or distributors of this product who said: “I only distributed an authorized product, so you can’t do anything against me”, there, we have a court which tells us that the authorizations of the 1970s were illegal and therefore are likely to involve the responsibility of the State, but also can call into question the responsibility of the distributors”, explains the lawyer.

Other procedures are currently underway, concerning the use of chlordecone in the West Indies, including a complaint for poisoning filed sixteen years ago. However, the two investigating judges from the public health center of the Paris court announced, on March 25, to the complainant communities and associations their intention to close this file without issuing an indictment, thus directing it towards a possible no -venue. Me Lèguevaques intends to appeal to obtain recognition of the prejudice of anxiety, like what the victims of asbestos obtained.