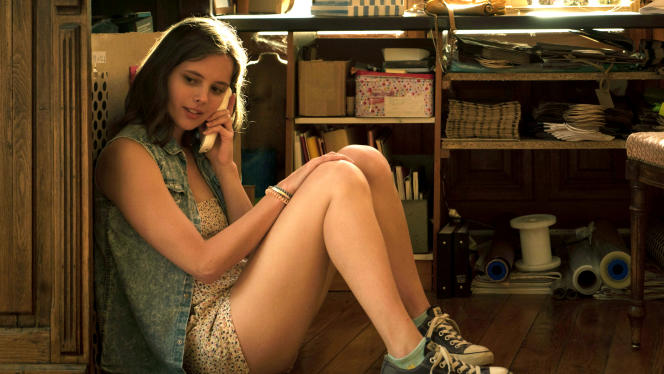 It’s rare, so rare, to say and show adolescence, desire, sex, first times so well. The hours spent waiting – what? -, to choose – who, him or another? The pains, the joys, the disappointments – a thousand times stronger. Friends and loneliness, too. And the films we make, the stories we tell. To others, to oneself. Rare to render these moments so well when everything mixes, between stuffed animals and chic underwear.

It’s so rare, and yet that’s what Rodolphe Tissot achieves admirably with Clèves – which won the Prize for Best Director at the last edition of the La Rochelle Fiction Festival, and Louisiane Gouverneur, the main actress, that of the young female hope (even if the entire cast is impeccable: Vincent Deniard, Aymeric Fougeron and Sarah Suco). To top it off, just as there are sometimes stories touched by grace and happy endings, Clèves is not only a successful adaptation of the eponymous book by Marie Darrieussecq, but the novelist is enthusiastic: “I found the very strong and audacious transposition of Rodolphe Tissot: while taking liberties, it is quite faithful to the substance. »

“The anguish of being a virgin”

So let’s recall the background. In Clèves (P.O.L, 2011), Marie Darrieussecq told the story of Solange, who, in the humidity of the Basque summer when she was 15, had only one desire: to be freed from “the anguish of being virgin”, and, therefore, “do it”. Even if the prince was not so charming, or too old for her. Rodolphe Tissot remembers: “Reading it, I fell in love with it. I had the impression that Marie Darrieussecq was telling me about my own adolescence. And then we are from the same generation, and she also told about the 1980s, life in the provinces. »

However, Rodolphe Tissot has chosen to camp his Cleves in Haute-Savoie (his adolescence to him), today. Both for fear of falling into nostalgia and because, he tells us, “even if society has evolved, and that is fortunate, especially since

So, of course, perhaps more than a phone call, it’s now a like on his Instagram “story” that we expect. But Barthes and his Fragments of a Love Discourse are never far away, as there is something absolutely universal and timeless about falling and being in love – especially the first times. Nor have – “alas”, as Marie Darrieussecq points out – changed “all those relationships that today’s teenagers describe as ‘toxic’: we continue to confuse making love with dominating”. And the author specifies: “I have three children, who are now 21, 18 and 13 years old, who, all feminists, teach me a lot, and I am completely connected with the generation

Besides, make no mistake, this is not a book or a movie about consent, and Solange is a character, not an example. It is rather the story of a teenager, and her way of apprehending life, of exploring her desire – “and desire is anything but polite”, recalls Marie Darrieussecq.

It is therefore both cruel and tender, painful and joyful, clumsy and sensitive, sometimes violent, and this is what Rodolphe Tissot so accurately films, who, far from clichés, avoids complacency and eroticism and shows the hesitations and discomforts, during and after. Assisted by Maryam Muradian – an “intimacy coordinator”, a fairly common position in Anglo-Saxon countries, but which does not yet really exist in France – he filmed the sex scenes with great respect and gentleness. so that “it is not traumatic for the actors”.

Likewise, he had the delicate intelligence to surround himself with a largely female team: scriptwriter, editor, props man; “which is not insignificant, when you know that it is the props man who comes, for example, to deposit the sperm on the belly of the young actress”. He also wanted to work with sound editors, Fanny Martin and Jeanne Delplancq, because “it was important to me that women take charge of Solange’s murmurs, sighs”.

But, there again, if Clèves is, in this sense, realistic, it is in no way a naturalistic documentary. It is – and what undoubtedly makes it even stronger – a film of rare beauty which tells, from the inside and as closely as possible, the sting of the flesh and the fury of living of a teenager. Director of the multi-award-winning fiction La Tueuse (2009) and co-creator of the series So be they (2012), Rodolphe Tissot had in mind A nos amours (1983), by Maurice Pialat, and Trop de bonheur (1994), by Cédric Kahn. . From now on, we will also have to count on the light of Cleves.