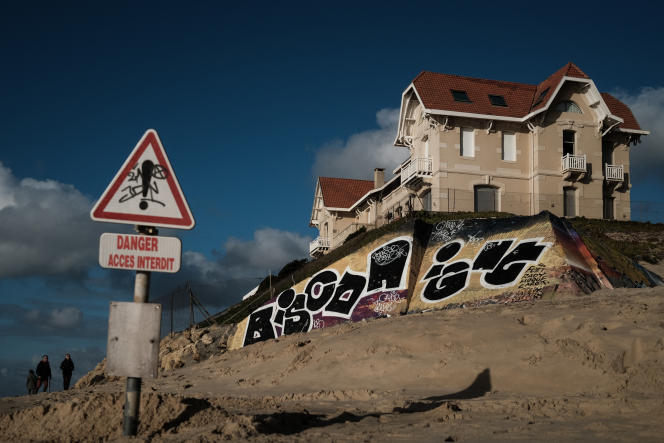 Storms, swells, lack of sediment, rising waters, port activity… Due to global warming and the intensification of human activities, the erosion of the French coastline is increasing. According to the national indicator of coastal erosion, a fifth of the French coastline (excluding Guyana) is affected by the retreat of the coastline, which is manifested by the retreat of dunes or the erosion of cliffs.

To deal with this phenomenon, the government published, at the end of April, a list of one hundred and twenty-six municipalities, which will have the obligation to adapt as a priority to this erosion. A decree, included in the Climate and Resilience Law of 2021, provides for new provisions for the most vulnerable municipalities. Forty-one of them are in Brittany, thirty-one in New Aquitaine and sixteen in Normandy. The most affected department is, by far, Finistère, with twenty-three municipalities on the list of municipalities considered to be priorities. The overseas territories are also concerned, primarily Guadeloupe and Martinique, with respectively nine and thirteen municipalities appearing on the list.

Based in particular on the national indicator of coastal erosion, the government had first established a list of more than three hundred municipalities, particularly exposed. The authorities then contacted the town halls concerned, leaving them the choice of whether or not to join the list of priority municipalities.

“This decision, with serious consequences for the municipalities, had to be taken in haste”, regrets Eric Verlhac, director general of the Association of mayors of France (AMF), who seized the Council of State, Thursday, May 19 , in order to obtain “legal clarifications” concerning the measures induced by this decree.

“We wanted to issue a first decree before the end of the five-year term”, details the Ministry of Ecological Transition, acknowledging “tensions with certain municipalities very reluctant to integrate this list”. The ministry specifies that the municipalities which wish to “allow themselves time for reflection” will be able to join the list at any time, when those, “particularly exposed, who refuse to join the system, will ultimately be forced to do so”.

Several municipalities have refused to participate in this system. Some elected officials refer to the “vagueness” around the measures to be put in place. Mr. Verlhac also deplores “the lack of consultation with the general public and elected officials”. On this point, the Ministry of Ecological Transition recognizes a “pedagogical work necessary with the municipalities so that a new decree is adopted at the end of the year”.

For the municipalities that have joined the system, it will be a question, initially – but without a deadline at this stage – of producing maps to measure the risk of coastal retreat in thirty and one hundred years. These maps will then serve as the basis for new land-use planning rules, including building bans. In areas exposed to the thirty-year horizon, new construction will be prohibited. Exceptions will be possible for the extension of existing buildings or the installation of public services and new economic activities requiring immediate proximity to the sea, such as a surf school. The zones on the 100-year horizon will remain constructible, with, in the long term, an obligation to demolish when the threat approaches.

To enable local authorities to launch this new land development, an ordinance published in early April specifies the means of acquisition by the public authorities of the property at risk. Granted by the State or the municipalities, a new type of lease of twelve to ninety-nine years, cancellable in advance depending on erosion, will be created for land, commercial premises or leisure parks, in the areas concerned. The text also provides for a discount on real estate assets considered vulnerable to the risk of erosion.

In a joint press release from the National Association of Coastal Elected Officials (ANEL) and the AMF, many elected officials say they fear a depreciation of real estate which will confront them with legal proceedings from owners wishing to sell at a high price. . “The legal uncertainty that weighs on this law is likely to lead communities into endless legal debates”, summarizes Mr. Verlhac, according to whom the opinion of the Council of State will make it possible to “secure this system to make it tenable with of the elect”.

The other point of tension is based on the financing of the relocation of threatened property induced by this law. Such fallback measures would indeed cost several hundred million euros. A budget beyond the reach of municipalities.

If the ministry recognizes “a lack of sustainable funding”, it believes that the Climate Law has made it possible to “lay the first bricks of a project which the next Parliament will have to consider”, in particular to free up funding for fallback scenarios. “A colossal project that will occupy the coasts for the next thirty years,” concludes the former ministry.