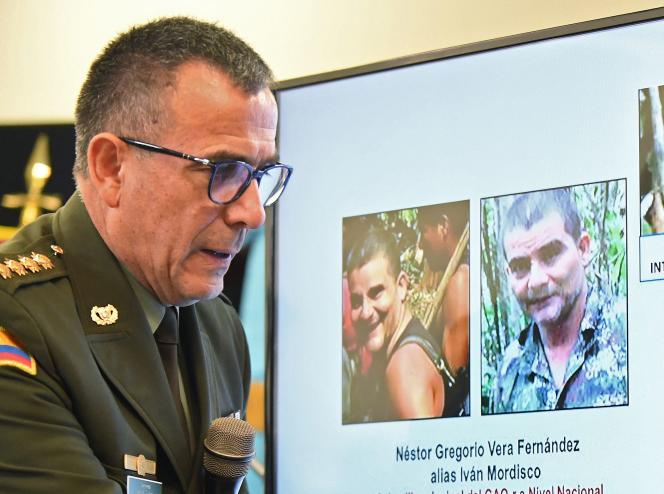 Nestor Vera, alias “Ivan Mordisco”, main leader of the dissident ex-guerrilla Revolutionary Armed Forces of Colombia (FARC), was killed a week ago by the army in the southwest of the country, announced Friday, July 15, to the press, the Minister of Defense. “This operation allowed the neutralization of nine individuals on this first front of FARC dissent and the neutralization of the one nicknamed Ivan Mordisco,” said Diego Molano. “The last great leader of the FARC has fallen and this is a final blow to dissent”, added the minister.

For several weeks, about 500 soldiers had been deployed in the department of Caqueta to try to locate Nestor Vera, said the commander of the armed forces, General Luis Fernando Navarro. On July 8, the military launched “a strategic operation with main air support”, he added. Ten rebels were killed, including Nestor Vera and four of his relatives, including his partner and two other women, he said.

Police presented a photo of a green beret adorned with a red star and the hammer and sickle symbol, found at the scene of the operation and believed to have belonged to the rebel leader. “The structure of the nicknamed Ivan Mordisco represented one of the worst threats to Colombia and was destroyed by the heroes of our army,” said President Ivan Duque.

Nestor Vera, whose age authorities did not specify, had recently assumed command of the dissent after the alleged death of another rebel leader, Gentil Duarte. He had been fighting in the rebellion for 35 years, according to the defense minister. The Colombian government offered a reward of 700,000 dollars (694,000 euros) for any information leading to his whereabouts. Informants collaborated with the army and received the promised reward, police director General Jorge Luis Vargas said.

In July 2016, four months before the signing of the historic peace agreement that ended nearly sixty years of conflict, Nestor Vera became the first FARC leader to abandon the peace process with other rebels. He then began to recruit new fighters to take control of forest areas in the south-east of Colombia, the world’s largest exporter of cocaine.

The army accused the rebel leader of organizing the shipment of drugs to Venezuela and Brazil. The authorities also accuse him of having ordered dozens of attacks against the security forces, the forced displacement of populations and the assassinations of social leaders, and of having kidnapped a UN official for two months in 2017.

At the end of May, the government announced the “presumed death” of Gentil Duarte, real name Miguel Botache Santillana, one of the main dissident leaders of the ex-guerrilla, who was reportedly killed in early May in Venezuela. According to the government, Nestor Vera was engaged in a bitter struggle for control of drug trafficking routes with another breakaway faction, led by Ivan Marquez who signed the peace accord before taking up arms again in 2019. Bogotá claims that ‘Ivan Marquez was recently the victim of an attack in Venezuela where he would be hospitalized. Caracas evokes “speculations”.

“Today there are no longer any of the leaders, great commanders, that the FARC had in Colombia (…) It is a fundamental blow to their project of refoundation,” added Minister Molano. Without a unified command, FARC splinter groups number around 5,200 men in different regions of the country, according to the NGO Indepaz, and finance themselves through drug trafficking and clandestine mines. The majority of these men (85%) are new recruits who have never been part of the FARC, according to the same source.

News Editor - July 19, 2022 0
It is a matter of national emergency. Never in its history has the British Health Safety Agency issued a level 4 alert. This is...