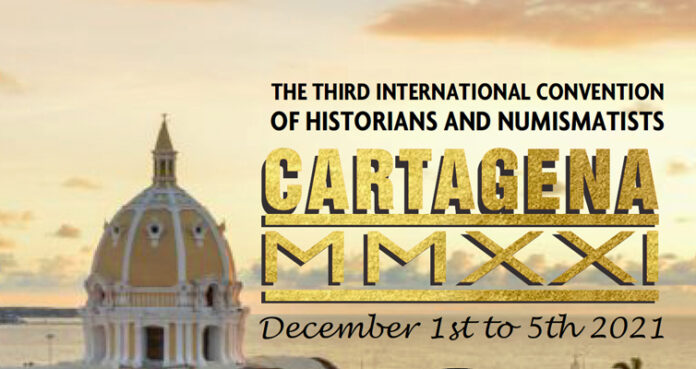 A global body of historians and numismatists, researchers, and academic professionals is expected to gather in Cartagena (Colombia) in December for the 3rd International Convention of Historians and NUmismatists.

Cartagena MMXXI will be held from Dec. 1 through 5. It will include publication of previously unpublished research, more that 25 lectures by prominent researchers and a prestigious bourse with rare Latin American numismatics. There will also be numerous social events. The culmination of the event is a gala.

The Colombian Numismatic Foundation hosted the event. It also celebrated the 400th anniversary of the first coinage produced in Colombia, the New Kingdom Of Granada. This coinage was struck at Cartagena’s Cartagena mint on 1621.

The famous treasure galleon of San Jose, which was sunk in 1708 and still rests off the coast, is still a landmark.

The biennial International Convention of Historians and Numismatists is the most prestigious and representative numismatic event of Latin America. It brings together more than 20 countries and over 20 associations, researchers, and collectors from all three continents.

Participants who are unable to attend the event in person can join by using a virtual attendance option.

To mark the occasion, a commemorative medal in bronze and silver is available. A gold and an aluminum version were produced and have been sold out. A unique platinum version will also be available for auction at the conference.