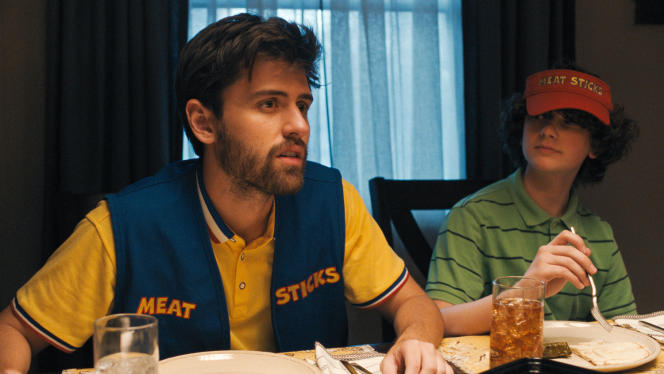 Cooper Raiff radiates charm. On screen in his second film, Cha Cha Real Smooth, but also during a Zoom conversation, where the rapid delivery of the 25-year-old director, screenwriter and actor betrays his impatience to tell everything very quickly. Spotted at the Sundance festival, where he won the coveted Audience Award in January (which revealed Steven Soderbergh, David O. Russell, Lee Daniels, Ryan Coogler or Damien Chazelle), bought in stride by Apple for 15 million dollars , Cha Cha Real Smooth is an indie candy that chronicles Andrew’s (Cooper Raiff) tumultuous coming of age. Two films in two years, therefore (the first, Shithouse, had already been crowned with the Grand Prix at the South By Southwest festival in 2020), for a boy who grew up in Dallas, Texas, a priori very far from a Hollywood destiny .

His childhood, “very happy”, Cooper Raiff spent playing basketball, before the cinema arrived, for practical reasons. “In one summer, some of my buddies got bigger and faster, and I stayed the same,” he said. So I fell in love with cinema. At home, the father is a lawyer, the mother a psychologist, and daily life revolves around her little sister, who is severely disabled. In the final year, on the advice of a theater teacher, the high school student begins to write. “On what he knows,” he said. His sister, his mother’s devotion to this different child…

So many elements that are found in Cha Cha. Intimate material reworked with Freudian sauce: in the film, Andrew falls in love with Domino (played by Dakota Johnson), a thirty-year-old who, having had her daughter at a very young age, seeks to reconcile her obligations as the mother of an autistic child and her woman’s life. “My mother fascinates me, candidly confides the director, but I quickly realized that I was only able to tell a story from my own point of view. »

Rather than a film about disability, Cha Cha Real Smooth is therefore a meditation on the twenties, this decade when the transition to adulthood must take place, often in trouble. It is this moment told at the height of the protagonist, by a filmmaker of the same age, which gives the film its emotional authenticity.

In the mid-2010s, with his baccalaureate in hand, the young Texan enrolled in college in Los Angeles, determined to get into the cinema. He loves Cameron Crowe films and is obsessed with the Duplass brothers’ series, Togetherness, about the adventures of a middle-class Californian family. At the end of his first year, he spends the summer holidays at his home in Dallas, driving Uber Eats while writing a series that he sends to all the agents in Los Angeles whose contact he manages to find. . Embarrassed responses ensue. “Today, whenever I have an agent on the phone to discuss a project, I tell him to look up my name in his email inbox and he finds my series there,” he laughs.

The following summer, Cooper Raiff convinced his best friend and his girlfriend to make a medium-length documentary about their lives, which he tweeted to his idol, director Jay Duplass, with the comment: ” I bet you won’t click on that link. But Duplass clicks and offers her lunch. The master of mumblecore, this cinematographic wave of the 2000s which gave pride of place to a naturalistic, talkative and fresh independent cinema, takes Cooper Raiff under his wing. The young man loves filming the daily routines of his characters. Duplass teaches him to reveal them through conflict, to find the little trick that will hook the viewer.

For Cha Cha, Raiff came up with the idea of ​​making his main character a “bar mitzvah starter”, a kind of emcee who has to get the party started. “When I found that detail, the fact that Andrew is good at starting other people’s parties but has trouble throwing his own, it was a great feeling,” he says. There is Xavier Dolan (less harsh), Miranda July (less whimsical), Nouvelle Vague in his house too, even if Raiff proclaims himself a late cinephile – “I was 24 when I saw The Godfather for the first time ! “. Charismatic, delicate and oddly shameless, Cooper Raiff has the charm he imparts to his films. A melancholy lightness that independent cinema needs.