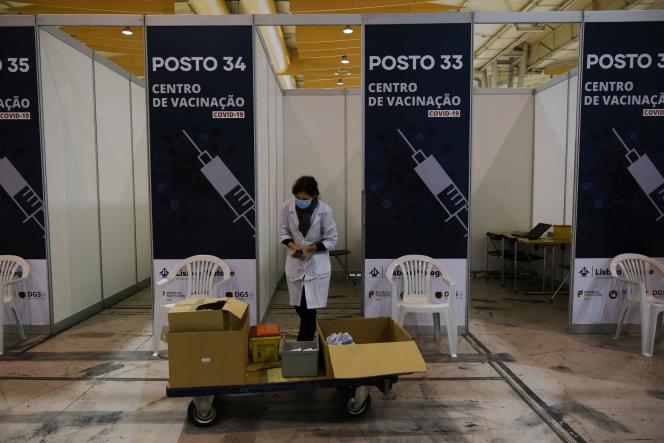 Portugal is breathing again, as the latest wave of Covid-19, linked to the BA.5 variant, ebbs. The latest weekly bulletin from the Directorate General of Health (DGS), published on Friday July 1, confirms that the number of cases is decreasing at as rapid a pace as it had jumped at the end of April. Between June 21 and 27, the country recorded 73,000 new infections, 22,000 less than the previous week and far from the peak recorded between May 17 and 23, when 189,000 new cases had been identified. The number of people in intensive care is also falling slowly (81 people, – 4), as is the number of deaths, which went from 243 to 146 in one week, 70% of which concerned people over 80 and 90% more. 70 years old.

If the incidence rate remains high, at 712 cases per 100,000 inhabitants, it is no longer as alarming as at the height of this seventh wave, when, at 1,835 cases, it had made Portugal the second country. hardest hit in the world by the resurgence of SARS-Cov-2. In May, this alarming situation had prompted the Portuguese government to recommend the return to wearing a mask in enclosed spaces, at work, and during major outdoor events, and provoked a lively debate among experts on the need to make it more again mandatory.

Reluctant to this idea, the socialist executive preferred recommendations to injunctions, sensitive to the general weariness caused by two years of restrictions. In the past two months, he has multiplied calls for responsibility and ruled out the administration of a fourth dose to the entire population, confident in the prognoses of the pandemic monitoring committee of the Higher Technical Institute of Lisbon. . Made up of mathematicians, statisticians and epidemiologists, the latter had assured at the end of May that the peak had been crossed and that deaths would remain high until the end of June. He was not mistaken.

While the rest of Europe is seeing new contaminations jump, Portugal is one of the only countries to show a downward curve which allows it to approach the start of the summer tourist season more calmly. On July 1, Lisbon lifted the obligation to present the Covid pass or a negative test to air passengers landing in the country. “The epidemiological situation experienced in Portugal following the Covid-19 pandemic has remained relatively stable due to high vaccination coverage, the emergence of new drugs for severe forms and better knowledge of the infection. “, detailed, in a press release, the National Authority of Civil Aviation (ANAC). Portugal is indeed among the top tier of the most vaccinated countries in Europe – almost 95% of the adult population has received two doses, and 76% have received three.

In addition, on June 30, the Minister of the Presidency, Mariana Vieira da Silva, announced in the Council of Ministers that the period of isolation of positive cases was reduced from seven to five days. “Apart from these two changes – the change from seven to five days and the removal of the travel certification requirement – ​​the rules remain the same, with the obligation to wear a mask on public transport and the recommendation of wearing the mask when we are in contact with more vulnerable people, in the event of symptoms or high-risk contact,” she added. The mask also remains compulsory in hospitals, nursing homes and pharmacies, as well as in public transport, where it has never ceased to be since the start of the pandemic.