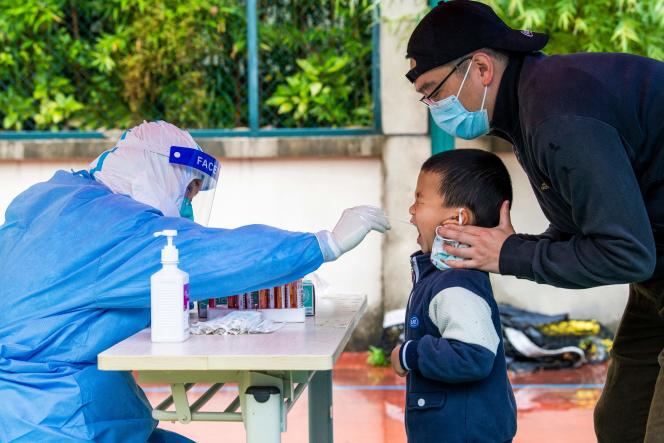 The city of Shanghai announced on Sunday the “gradual” reopening of businesses from Monday, May 16, when the inhabitants of the Chinese economic capital are showing themselves to be more and more exasperated after two months of confinement.

China, which has been facing its worst epidemic outbreak in two years in recent weeks, put the huge metropolis, epicenter of the contagion, under cover at the beginning of April. Some of Shanghai’s 25 million people, however, were already confined to their homes before that date.

Exasperated by the problems with the supply of fresh produce, access to non-Covid medical care and the sending of people who tested positive to quarantine centres, many are venting their anger on the Internet.

A drop in positive cases

On Sunday, the vice-mayor of Shanghai, Chen Tong, announced the reopening “in stages” of businesses from Monday, May 16, without specifying whether he made the resumption conditional on health criteria. In China, any lifting of restrictions is generally conditional on “zero contamination in society”, that is to say no new cases for three days outside quarantine centers.

Shanghai authorities are aiming for this goal in “mid-May”. The decline seems to be underway: 1,369 new cases were announced on Sunday in Shanghai, compared to more than 25,000 at the end of April. In some areas of the city, however, the restrictions are tending to tighten.

1,200 kilometers further north, the capital, Beijing, lives in fear of confinement, after more than a thousand cases recorded since the end of April. The city has repeatedly tested residents for SARS-CoV-2, confined residences housing people who tested positive, and closed subway stations and non-essential businesses in some neighborhoods.

To curb the contagion, the district of Fangshan, located in the southwest of Beijing and which has 1.3 million inhabitants, suspended the circulation of taxis on Saturday. Apart from a few confined neighborhoods, the vast majority of the 22 million Beijingers can still leave their homes.

However, many public places are closed and residents are forced to work from home, especially in the Chaoyang district in eastern Beijing, the most populous in the capital and where many multinationals are based.