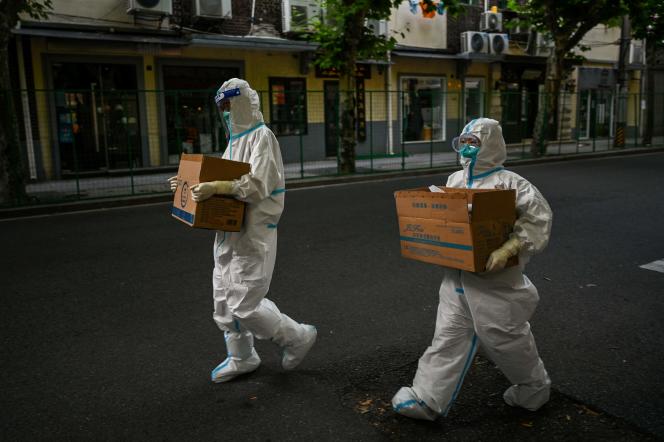 An announcement that arouses the concern of the inhabitants of the Chinese metropolis as to a potential general reconfinement of the city. Despite the deconfinement that began a few days ago, Shanghai announced on Thursday June 9 that it would confine a district of 2.7 million inhabitants on Saturday in order to screen the entire population there.

Minhang district in southwestern Shanghai will be confined on Saturday morning and its residents will have to take a PCR test, local authorities announced on the WeChat social network. “The closure will be lifted after the samples are collected,” they added, without specifying a specific date or time, or what action would be taken if positive cases were detected. Under the national “zero Covid” health strategy, all those who test positive are in theory placed in quarantine.

The city last week lifted much of the restrictions on its 25 million residents, who had been locked down since at least the beginning of April in order to deal with an outbreak of Covid-19, the most virulent since 2020. But the deconfinement is not total: several hundred thousand people remain confined to their residential complexes due to the detection of positive cases.

“What will happen if there are positive results? »

“Will the [Minhang] district’s lockdown really be lifted after the samples are collected?” asks a user of the Weibo social network. “What will happen if there are positive results? Will the lockdown continue? “, worries another. The city hall on Thursday denied rumors that the rest of Shanghai would be confined again.

The confinement has dealt a severe blow to the economy, but the metropolis has been coming back to life for a few days. Subways and buses are running again, while Shanghainese are enjoying the city’s restaurants, bars and parks. Some residents, however, are still stuck at home, which sometimes causes tension with the authorities. The Ministry of Health on Thursday reported nine new positive cases the day before in Shanghai.

The Chinese capital, Beijing, is slowly moving closer to normality after closing restaurants, bars, gyms and parks last month to stamp out an outbreak – much smaller than in Shanghai. The main district of the city, that of Chaoyang, however ordered the closing of clubs and bars on Thursday after the detection of a few cases, announced official media.