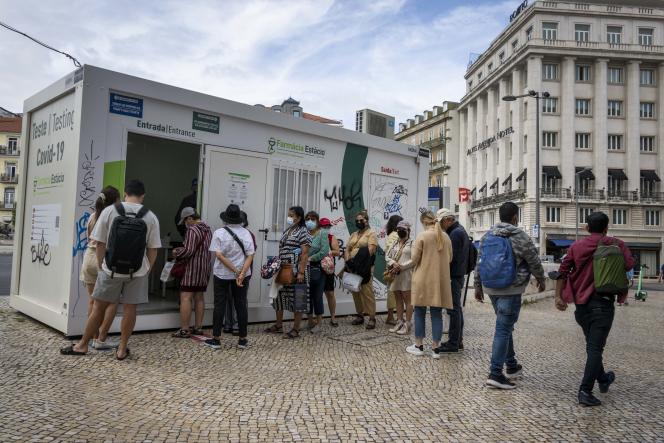 With more than 18,860 cases per day, the Covid-19 epidemic in France reached, at the beginning of June, the levels recorded at the end of November 2021. Then began the long winter wave caused by the Delta variant, quickly supplanted by Omicron, which has now reigned supreme for six months in France and around the world. BA.1, BA.2 and finally BA.4 and BA.5: the different cousins ​​of this branch apart from the phylogenetic tree of the large SARS-CoV-2 family impose themselves one after the other.

Each new sub-variant takes precedence over its predecessor and brings with it a resurgence of contamination. “Each sub-variant has its quarter of an hour of fame,” summarizes Olivier Schwartz, head of the virus and immunity unit at the Institut Pasteur in Paris. The virus remains contagious and tries to sneak into the overall immunity present in the population. A question therefore arises: while the vast majority of the French population has been vaccinated and half have been infected with Omicron, how long will they be protected against the newcomers BA.4 and BA .5?

These youngest of the Omicron family were identified for the first time in South Africa, where they caused a new wave of contamination in April-May, much smaller than the previous ones which had been repeated every six months until then. with metronome regularity. In Portugal, it was the BA.5 sub-variant alone that prevailed in April, leading to a very significant resurgence of contamination; as of May 30, it accounted for 87% of cases. Despite the thousands of kilometers that separate them, these two countries have one thing in common: the BA.2 sub-variant circulated relatively little there at the beginning of the year.

The Portuguese case, apart from Europe, therefore raises questions. “Is the BA.5 wave in Portugal so big because they didn’t have a BA.2 wave, unlike most European countries? And, as a result, will France, which had a BA.2 wave, be better protected against the arrival of BA.4/BA.5? asks Arnaud Fontanet, epidemiologist, member of the Covid-19 scientific council and director of the global health department at the Institut Pasteur.

For the moment, no data is available on the protection conferred by a history of BA.2 infection. Admittedly, in the countries affected by the BA.2 wave, such as Denmark, the United Kingdom, Germany or France, BA.4 and BA.5 are beginning to circulate. “But they are still at levels too low to have robust data”, specifies Public Health France to World. Seroneutralization tests carried out in vitro nevertheless provide some clues to the immune escape capacity of BA.4 and BA.5.

A first non-peer-reviewed South African study published on April 24 shows that antibodies from unvaccinated patients previously infected with BA.1 (which caused the first Omicron wave as early as late December) neutralize about 7.5 times worse BA.4 and BA.5. In vaccinated people, this decrease in neutralization is less: about three times less. This means that a person infected with Omicron at the beginning of the year is not completely protected against the risk of reinfection with BA.4 or BA.5, whether vaccinated or not. The authors conclude that “BA.4 and BA.5 have the potential to cause a new wave of infection.”

Another study, Chinese, published on May 2, confirms that the plasma of people who have received three doses of vaccine, like that of vaccinated BA.1 convalescents, neutralizes BA.4 and BA.5 less well. The authors go even further in their findings, warning: “Omicron’s continued evolution poses great challenges to herd immunity from SARS-CoV-2 and suggests that BA.1-derived booster vaccines cannot be -be not ideal for obtaining broad-spectrum protection. A vast debate that will surely be reopened at the start of the school year, with the prospect of a winter wave.

Vaccination seems to keep its promises

Until then, how will it be for people infected with BA.2, so mainly since March? BA.4 and BA.5 are genetically close to their predecessor, which contributes to the hypothesis that contamination by BA.2 would protect against reinfection. A few mutations set them apart, however, including the L452R mutation on their spike protein, which serves as the key to entering human cells. “This mutation is well known, it was already present in Delta, which made this variant more transmissible and more resistant to certain antibodies”, recalls Olivier Schwartz. Additionally, BA.4 and BA.5 have additional mutations in their arsenal, further enhancing their antibody resistance.

All these characteristics, to which must be added the epidemiological context specific to each country, partly explain why these sub-variants will gradually impose themselves in the world. In France, they already represent 12% of contaminations and are expected to become the majority in June, given the growth rate of 10% per day observed in several countries. “This will probably be accompanied by a small increase in cases, but the amplitude of this wave is very difficult to anticipate, analyzes Arnaud Fontanet. Regarding hospitalizations, the signals from Portugal and South Africa are rather reassuring: we do not expect a major wave in hospitals. At the moment, there is nothing to suggest that BA.4 and BA.5 are more severe than the other Omicron sub-lineages.

Vaccination therefore seems to be keeping its promises: despite reinfections, serious forms are less numerous than in previous waves. “The problem should not be minimized either, nuance Antoine Flahault, director of the Institute of Global Health (University of Geneva). If there is a strong wave in terms of contaminations, the associated mortality, in absolute numbers, remains quite high: in Portugal, at the moment, there are around 30 deaths per day, i.e. – in terms of the number of inhabitants – the equivalent of 200 people per day in France. For the epidemiologist, Europe could be heading towards a scenario close to that of 2021, when the Delta variant had imposed itself in June: “This wave could be spread over two seasons, a small one in the summer and a more important in the fall. »

In France, the decrease in cases that began since the peak in early April seems to have already stopped. For the past few days, new contaminations have been on the rise again, without it being possible to say yet whether we are heading for a new wave. Public holidays in May complicate the reporting of cases in the SI-DEP contamination database, monitoring of the incidence may have been disrupted in recent weeks. In any case, new hospital admissions are still decreasing, as is mortality. We will have to wait a few weeks to see if the trend is confirmed.

Beyond Omicron, we must not lose sight of the possibility that other variants, with their own characteristics, will arise in the months to come, further shaking up our knowledge and strategies in the face of the virus. “We must keep in mind that all the dominant variants of SARS-CoV-2 (Alpha, Delta and Omicron) appeared unexpectedly”, observe American researchers in a study published on May 26. “Our collective surveillance effort must be maintained. »