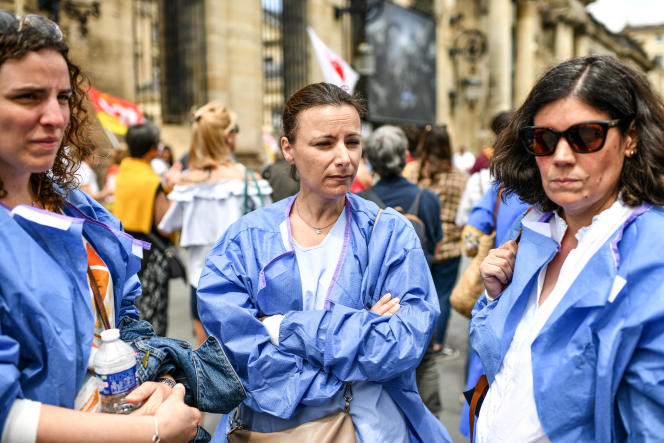 Faced with the emergency physicians gathered in congress in Paris, the new Minister of Health was particularly expected, while the emergency services are on the front line in the crisis that the hospital has been going through for several weeks. Overtime paid double, student nurses “immediately” employable on leaving school: Brigitte Bourguignon announced on Wednesday June 8 “first measures” to overcome a “difficult summer” at the hospital, without waiting for the conclusions of the ” flash mission” on emergencies launched by the President of the Republic, a few days earlier.

“Summer will be difficult” and it will be necessary “to find solutions so that the French are not deprived of care”, declared Ms. Bourguignon, who recognized a “risk of disruption of access to real care”. One hundred and twenty emergency services are already forced to operate in degraded mode, by reducing their workforce or by closing at night or on weekends, according to a count carried out on May 20 by the SAMU-Urgences de France association.

“The government is taking responsibility for the crisis,” said the minister. The executive has “decided to reactivate the doubling of overtime pay for non-medical staff, and additional working time for doctors, for the entire summer period”. This system was put in place during the Covid-19 crisis, during which human resources were already one of the critical points for maintaining the supply of care.

The Minister also announced “an exceptional system” so that “student nurses and caregivers who completed their initial training in June and July [can] start practicing immediately, without waiting for the official presentation of their diploma”.

A measure which should nevertheless have a limited impact on the workforce, to hear the students: it is, for nursing students, “one to two weeks between leaving school and graduation”, according to Mathilde Padilla, President of the National Federation of Nursing Students. “It will be voluntary, and you will always have to be supervised by a nurse,” adds the representative.

Retired caregivers “volunteering to resume an activity” this summer will benefit for their part from “facilities for accumulation [with] their retirement pension”, also announced Brigitte Bourguignon. The regional health agencies have also been ordered to “remobilize the territorial crisis management systems” to coordinate public hospitals, private clinics and liberal professionals.

“There have been a few announcements, it’s positive, reacts Philippe Revel, head of the SAMU-SMUR adult emergency unit at the Bordeaux University Hospital. We have to keep a positive state of mind, otherwise we won’t be able to do it this summer. The CHU Pellegrin emergency room is one of the services hit hard by the crisis, with a closure decided at night since May 18, patients being called upon to go through the 15th systematically before moving.

For the head of the CGT-Santé Christophe Prudhomme, who called the day before for a mobilization with eight other trade unions and collective caregivers, the government response is nevertheless far from being up to par. “We are reactivating the same measures as those proposed to pass the Covid waves, but these are not solutions, he judges. Caregivers need to breathe this summer, they are already being told not to take more than two weeks off, and there, they are being offered measures to work more, it is not serious, many are already not accepting more doing overtime… “

These “first measures will soon be supplemented by the proposals of the Braun mission”, added Brigitte Bourguignon. Emmanuel Macron has instructed doctor François Braun, president of SAMU-Urgences de France and health referent of the candidate La République en Marche during the campaign, with a “flash mission” on emergencies and unscheduled care, the results of which are expected by July 1. The response to the crisis will be punctuated “in three stages”, recalled the minister, the third stage corresponding to the major conference “with the stakeholders” on health, expected for this summer. “We will talk about everything, without totems or taboos,” said Brigitte Bourguignon, assuring that “particular attention” will be paid to recognizing the hardship of night work.

If the need to revalue what is called “permanence of care” (evening, night, weekend) has wide support in the ranks of caregivers, other measures are already causing a lively debate in the medical community, such as the establishment of systematic regulation by the SAMU to access emergencies, or the deployment of teams of nurses to compensate for the lack of emergency physicians in certain situations.

News Editor - June 9, 2022 0
The lifeless body of one of the eight miners trapped underground since April 16 in a zinc mine in Burkina Faso was found on...

Crisis in the emergency room: the government announces “first measures” before...