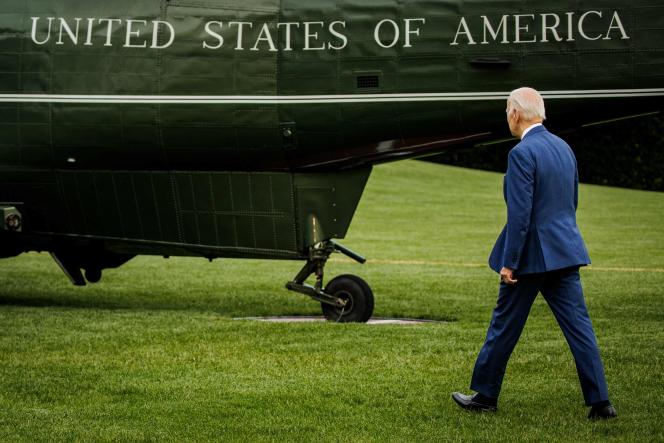 The exercise serves to defuse controversy and prepare the ground. At the start of his upcoming trip to Saudi Arabia, US President Joe Biden announced, in a column published on Saturday July 9 by the Washington Post, that he wanted to “strengthen a strategic partnership that is based on mutual interests and responsibilities, while respecting core American values”.

In this text titled “Why I’m going to Saudi Arabia”, the American president, who goes to Israel on Tuesday and then Friday to Jeddah in Saudi Arabia, responds to critics who accuse him to deny himself in order to extract from Saudi Arabia the promise to produce more oil. Joe Biden had, before his election, promised to make the oil monarchy an international “pariah” because of the assassination of dissident journalist Jamal Khashoggi in 2018.

“I know many disagree with my decision to go to Saudi Arabia. My views on human rights are clear and enduring, and fundamental freedoms are always on the agenda when I travel, and they will be while I’m away,” the President said. He recalls having declassified an explosive report by American intelligence concerning the circumstances of the death of Jamal Khashoggi.

But he does not mention in his column the name of Crown Prince Mohammed Bin Salman, who according to this same report “validated” the assassination. Joe Biden is due to meet him in Jeddah next week, as part of an expanded meeting around King Salman.

“My job as president is to keep the country strong and secure,” the 79-year-old Democrat says, citing the need to “counter” Russia, to put himself in “the best possible position” against China. and to ensure “greater stability” in the Middle East. “To do these things, we need to have a direct relationship with the countries that can contribute. Saudi Arabia is one, ”says Joe Biden again.

“In Saudi Arabia, we have reversed the blank check policy that we inherited” from previous President Donald Trump, adds Joe Biden. He clarifies: “From the beginning, my goal has been to redirect – but not to sever – relations with a country that has been our strategic partner for 80 years”.

The US president also refers to an important issue of his trip: oil, at a time when high gas prices are infuriating Americans and hurting his party’s electoral prospects. Riyadh, he assures, is “working with my experts to help stabilize the oil market”. Washington would like all the Gulf countries to open the floodgates to lower prices.

A region ‘full of challenges’

Joe Biden first planned to meet with interim Prime Minister Yair Lapid and Palestinian leader Mahmoud Abbas. Then he will fly to Jeddah on Friday, the first direct link of this kind between the Jewish state and an Arab country that does not recognize its existence. Donald Trump had already made this trip with a very strong symbolic dimension, but in the opposite direction.

The Middle East is “less under pressure and more integrated than eighteen months ago”, upon his arrival at the White House, assures Joe Biden. He mentions in particular the rapprochement between Israel and several Arab countries, started under the tutelage of the former Republican president. The Biden administration is “working to deepen and expand” this process, the Democratic president said.

Joe Biden wants to “make progress” in a region that remains “full of challenges”, between the Iranian nuclear program, and the unstable situation in Syria, Libya, Iraq, Lebanon… But he discerns none the less “promising trends” in the region, saying “the United States can strengthen them like no other country can.” That’s what my trip next week will be for.”