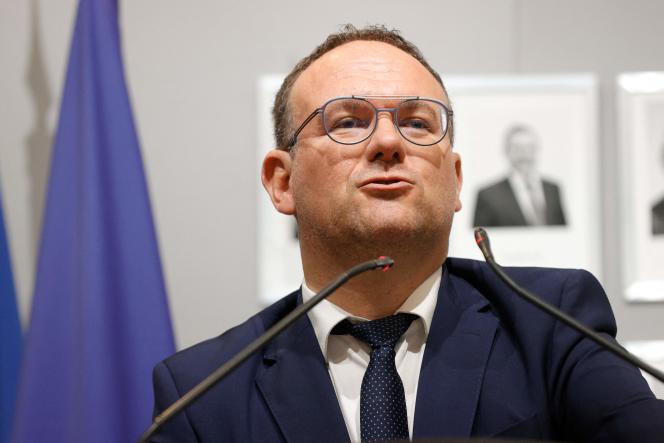 The first council of ministers of the Borne government had not yet started, Monday, May 23 in the morning, that several left-wing politicians called for the resignation of Damien Abad, accused of rape. Like the first secretary of the Socialist Party (PS), Olivier Faure, who wished the departure of the government of Mr. Abad, calling for “respecting the voice of women”. At the microphone of France Inter on Monday morning, Mr. Faure mentioned a “precautionary measure” which “does not call into question the presumption of innocence”.

Appointed Minister of Solidarity, Autonomy and Persons with Disabilities, Mr. Abad faces charges of rape, which he “in the strongest possible terms” denies, arguing that it is “physically impossible for him to commit the acts described” because of his disability. According to an investigation published by Mediapart, on Saturday May 21, a report for alleged acts of rape, dating back to 2010 and 2011, concerning the former boss of the deputies Les Républicains (LR), was sent by e-mail to the parties La République en Marche (LRM) and LR by the Observatory of gender-based and sexual violence in politics between May 16 and 20.

A report was made last week to the Les Républicains party, La République en Marche and the justice system, which says it is being analyzed. So far, the Paris prosecutor’s office has dismissed two complaints from one of the complainants, in 2012 and 2017.

“It seems to me that in a government that claims to have made the fight against violence against women the main cause of its five-year term, we must also be clear and say that this voice of women must be heard and that in a situation like ours know with the Abad affair, well, you have to make decisions which are difficult decisions, ”explained the first secretary of the PS, Olivier Faure, Monday morning on France Inter.

Asked what he would do in place of Elisabeth Borne, Mr. Faure repeated his wish to see the former president of the LR group in the National Assembly leave the government. “If I were prime minister, I would say to Damien Abad, ‘I don’t have any particular reason to think that women lie because I don’t see what the reasons are that would motivate them to do so. There is a doubt that exists today. The word of women must be respected and therefore, while waiting for a court decision, well I hope that you are not in government. »

For Sandrine Rousseau, candidate of the New People’s Ecological and Social Union (Nupes) in the 9th district of Paris for the legislative elections, “the question is not his resignation, but the fact that he is removed from office by precautionary principle “. “I think Elisabeth Borne should tell him that he has no place [at the council of ministers] and that it is not a question of his personal resignation. She must take responsibility. »

“I remind you that in all companies, in all associations, when there is a report, there is a legal obligation which is to carry out a serious, objective and impartial investigation. And this investigation is independent of justice. Why would the political world fall short of the obligations that apply to the rest of France as a whole? asked the ecologist.

“You have to send a pretty strong message to women, that their word matters. It’s not just a rumor, there is a complaint that has been filed. Obviously, LRM was aware, obviously, Elisabeth Borne’s cabinet was informed before the publication of the article, “she added on RTL on Monday.

“Respect for the presumption of innocence”

For his part, Eric Zemmour, far-right candidate (Reconquest!) in the legislative elections, invited on CNews, said he was “suspicious” and “doubtful about the methods of Mediapart, which seeks permanent information”, opposing “the precautionary principle”, but in favor of “respecting the presumption of innocence”.

Christian Jacob, president of the Les Républicains party, assured Le Point that he had “never been seized, neither by the Observatory of sexual and gender-based violence nor by the services of the National Assembly”. He pointed out that in the face of “rumors of a complaint filed (…) in 2017”, Mr. Abad “replied that all of this was false and that he had never been summoned by justice”.

As for the Prime Minister, Elisabeth Borne, questioned on the sidelines of a trip to Calvados for her campaign for the legislative elections, she said on Sunday morning that she had “obviously” not been “in the know”. She argued: “I will be very clear, on all these topics of harassment, sexual assault, there can be no impunity. »

“I have no more elements than the fact that the case has been closed without further action”, added Elisabeth Borne, assuring that “if there are new elements, if justice were again seized, we will draw all the consequences of this decision”. A position that Matignon clarified on Sunday afternoon in Le Monde: “We would draw the consequences of a decision that justice would render. »