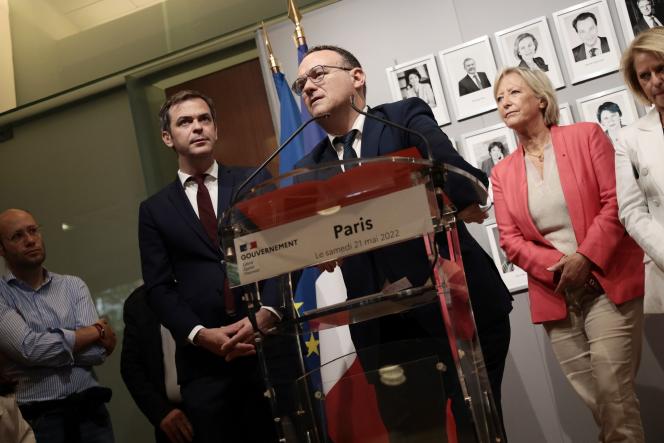 Barely taking office, it is a first storm that the new Borne government has to face. According to an investigation published by Mediapart on Saturday May 21, a report for alleged acts of rape dating back to 2010 and 2011, concerning the former boss of the deputies Les Républicains (LR) and new Minister for Solidarity, Autonomy and People disabled, Damien Abad, was sent by email to the parties La République en Marche (LRM) and LR by the Observatory of sexist and sexual violence in politics between May 16 and 20. It is based on the testimonies of two women.

It was following the receipt of the testimony of “Chloé” (the first name has been changed at her request), on May 13, that the Observatory transmitted, at her request, her report to the management of LR and LRM . This woman, now 41, describes the rape she says she suffered in 2010 and mentions the existence of a rape complaint filed by another woman against Mr. Abad – filed in 2017 and closed without action .

The organization also sent a letter to the public prosecutor on May 20, which the Paris prosecutor’s office confirmed to Agence France-Presse (AFP). The report, adds the prosecution, “is being analyzed”.

On the side of the parties, neither LRM nor LR reacted to the report sent by the Observatory. The president of the LRM deputies in the National Assembly, Christophe Castaner, affirms to Mediapart to have “not received anything” but to have informed the prosecution following questions from the news site. He also “advises” “the victim to file a complaint immediately”. Stanislas Guerini, the general delegate of the party just appointed minister, assures for his part that he has read the email from the Observatory of sexist and sexual violence in politics on Saturday morning, after being questioned by Mediapart.

At LR, the secretary general of the party, Aurélien Pradié, told him that he had not “consulted the mailbox on which this alert was sent to him”. He nevertheless claims to have questioned Damien Abad in 2020, following testimonies “of inappropriate behavior he would have had with collaborators”, an episode confirmed by Mr. Abad himself.

As for the Prime Minister, Elisabeth Borne, questioned on the sidelines of a trip to her campaign for the legislative elections in Calvados, she said on Sunday morning that she had “obviously” not been “in the know”. She assured “having discovered the Mediapart article yesterday [Saturday]”, and argues: “I will be very clear, on all these subjects of harassment, sexual assault, there can be no impunity. »

“I have no more elements than the fact that the case has been dismissed,” added Elisabeth Borne, assuring that “if there are new elements, if justice were again seized, we will draw all the consequences of that decision.” A position that Matignon clarified on Sunday afternoon in Le Monde: “We would draw the consequences of a decision that justice would render”.

A woman ‘in shock and profound disgust’

In her letter, “Chloé” testifies to having found Damien Abad in a Parisian restaurant and bar one evening in 2010, after having met him at the wedding of friends in common a few months earlier and having maintained exchanges by message to distance. “He offers champagne, I had a glass. And there, blackout, until the next morning. It had never happened to me, especially not after a single drink,” she says, recounting waking up the next morning “in a hotel room near the bar” with Damien Abad, “in his underwear. “, “in a state of shock and profound disgust”, fearing that he had been “drugged”.

To AFP, she said she was “relieved that it came out”. “I had knocked on quite a few doors for someone to do something after the complaint was dismissed, which I found unfair,” said the woman, a 35-year-old former centrist activist, who did not wanted to make his surname public.

A “consensual” relationship according to Abad

In a written response to Mediapart, Damien Abad disputes the accusations of the two women and “strongly affirms that the sexual relations that [he has] been able to have have always been based on the principle of mutual consent”. The minister claims to have “obviously never drugged anyone” nor “never accompanied by a woman without her consent”.

Regarding the complaint against him, Mr. Abad argues with Mediapart that it is “physically impossible for him to commit the acts described” because of his disability – he has arthrogryposis, a disease which blocks his joints and reduces his mobility. During the investigation, the elected official described a “consensual” relationship, assuring that there had been “no violence, no aggression, no moral constraint”, and only conceding possible “requests for [his] part” during the sexual intercourse, but without “at any time physical or moral constraint”.

Arguments put forward again by Mr. Abad in a press release made public on Sunday: “I strongly contest these accusations of sexual violence. I deny having exercised any form of coercion on any woman. Finally, I contest any abuse of power related to the functions I have held. »

He adds: “As for the reported comments that insinuate that I could have drugged and then transported, stripped and raped an unconscious woman, they are simply inconceivable and despicable. The new minister thus argues: “I will not allow myself to be destabilized, and my priorities are clear. I will devote all my energy to fulfilling the mission entrusted to me with our compatriots, at the service of the most vulnerable. »