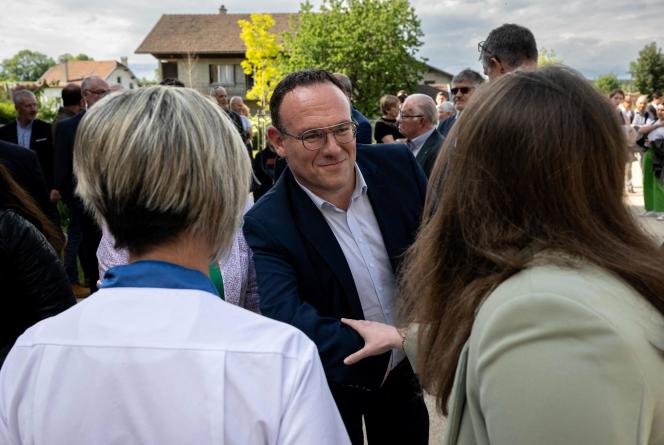 He wanted to make these legislative elections “the justices of the peace” of his retention in the Borne government, in the face of the two rape charges that have been aimed at him since May 21. Damien Abad, new Minister of Solidarity, Autonomy and People with Disabilities, qualified in the lead for the second round in the 5th constituency of Ain with 33.38% of the vote, under the colors of the presidential majority . The outgoing deputy will face Florence Pisani (23.54%), the candidate of the New Popular Ecological and Social Union (Nupes), Sunday, June 19.

The former leader of the group of Les Républicains (LR) deputies in the National Assembly, who left his political family on the eve of his appointment to the government, has been a deputy for this constituency since 2012. First candidate for the New Center (NC), he was elected for the first time with 56.40% of the vote, before being re-elected in 2017 under the LR label with 67.02% of the votes cast.

Accused of rape by two women

Mr. Abad had been aiming for a ministerial morocco for a long time and his rallying to Emmanuel Macron sparked the ire of his former political family. But this first controversy was quickly swept away. The day after his ministerial appointment, Mediapart revealed that the deputy was accused of rape by two women, for alleged facts dating back to 2010 and 2011.

The person concerned, suffering from arthrogryposis – a disease which reduces his mobility – denied the facts as soon as they were published, believing that he was “forced” “to put [his] handicap forward” to justify that “the facts [him ] were materially impossible”. The Paris prosecutor’s office, meanwhile, let it be known on Wednesday, May 25, that it was not opening a preliminary investigation, “as it stands”.

To justify the maintenance of the minister in the government despite the criticisms, the head of state affirmed that “the protection of the presumption of innocence is important” and that “Damien Abad is entitled to it like any citizen”, in an interview granted to the regional daily press, Friday, June 3. Damien Abad, on the other hand, relied on the results of the polls and the “confidence” of voters during the legislative elections.

From the UDF to LR to the Macronist shores

Mr. Abad was, in 2012, the first elected disabled person to sit in the National Assembly. He had taken the head of the first opposition group at the Palais-Bourbon, with a hundred elected officials, LR, in November 2019, succeeding in this position to Christian Jacob, who became president of the party.

The deputy began his political career in the center, before joining the moderate wing of LR. It was at Sciences Po Paris that he joined the UDF in 2007, before becoming, upon leaving his studies, group leader at the National Assembly on tax and budgetary issues.

Disappointed by the “lack of leadership” of François Bayrou, he won the New Center and became the youngest French MEP in 2009. Elected regional councilor of Rhône-Alpes in 2010, he finally joined the UMP – which has since become LR – in 2012 , after his accession to the deputies. In 2015, and until 2017, he also took over as head of the department of Ain.

While he left LR after a bitter defeat in the presidential election and weeks of silence, his former political camp had invested in front of him, for the legislative elections, Julien Martinez, municipal councilor of Oyonnax and close to Xavier Bertrand.