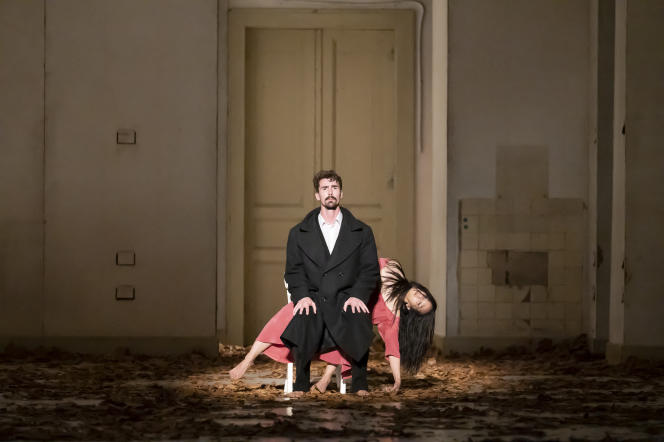 We had forgotten how it hurts. We come out disturbed, breathless. Pina Bausch (1940-2009) gave us her ball of pain. It is called Barbe-Bleue, was created in 1977, four years after the arrival of the German choreographer at the head of the Tanztheater Wuppertal. It caused a scandal at the time. She is still shaking. It’s a nasty, ruthless, youthful play in which Pina Bausch peers through the keyhole and kicks down the door. No drop of blood, but an acrid smell seems to stick to the dead leaves that cover the stage.

This essence of Pina Bausch, without fear or taboo, is on view until July 2 at the Théâtre du Châtelet in collaboration with the Théâtre de la Ville, in Paris. In the refined space imagined by the scenographer Rolf Borzik (1944-1980), it is hard to believe that this masterpiece is 45 years old as its virulence remains intact. Thanks to the historical dancers Helena Pikon and Barbara Kaufmann, rehearsal directors, the pure nightmare of this murderous trip to the castle, carried away by twenty-five more than remarkable performers, comes back to life, on the music composed in 1911 by Béla Bartok (1881-1945) . For this opera, the only one in his trajectory, the Hungarian artist chose the libretto written by the playwright Béla Balazs, based on the tale by Perrault. He conceives in six months the scarred score of this tragic collision between Barbe-Bleue and his wife Judith, who will join the cohort of wives behind the seventh door.

Everything is in the title (or almost). The show, which is summarized under the single name of the hero, is called Bluebeard. While Listening to a Tape Recording of Bela Bartok’s Opera “Duke Bluebeard’s Castle”. A mention is added, “A piece of Pina Bausch”. Way to specify that the original story serves as a springboard for the vision of the choreographer. If she takes hold of this tale of love, curiosity and horror, she broadens its subject to her personal vision of the fierce and unsatisfied relationships between men and women at the heart of her work for nearly forty years.

Pina Bausch’s genius idea is to plant the hero in front of a tape recorder and have him stop and then restart the tape to trigger his desire. This addiction to the musical motif, which underlines the confinement in a frenetic cycle, leads to a myriad of repetitive sequences whose brutality, far from being exhausted in insistence, is exacerbated. The prelude gives the impetus to this dramaturgy. Lying stiff on the ground, both arms outstretched, Judith (Tsai-Chin Yu) receives her man (Reginald Lefebvre) and trudges on his back with this package which suffocates him. He gets up, rewinds the music, and starts again. A few minutes later, kneeling between her legs, as she straightens up, he forces her to continue. She climbs him, he pushes her away. Dominant-dominated, predator and prey, and it starts again. Pina Bausch does not give presents to anyone.

It’s raw, more than clear, it’s Pina Bausch. Dread hovers over this piece of unleashing which liquidates the couple, let’s not talk about love, in a carnage of furious embraces. Because if she insists on the subject, the choreographer also multiplies it through duets that reverberate the main heroes. Men and women race forward, tearing each other apart in breaking lifts. It’s soon the orgy at the castle with programmed fainting, meowing and screaming, which intersect with hysterical laughter and tears. Regularly, the characters, necks lowered, take each other by the hand and form a chain of affliction. Repetition of the same fatal gear, the hunting board is deadly.

From the end of the 1970s to today, the astonishing creativity, the wild freedom of an author who smashes everything that can be expected of dance and theater, of virtuosity as a test of strength, explodes in this version of Bluebeard. As for the lucidity on the relations between men and women, it reveals itself without pity. The stereotypes, which Pina Bausch shreds, work to the full. It is to better denounce them and remind how much the encoding of each other remains deep. Guys roll biscotos in their underpants; women smear lipstick in front of a doll… Feminist, Pina Bausch? No doubt, but above all a fine connoisseur of the complexity and ambivalence of the human being, of its cruel impulses, of its unmentionable twists. And the guerrilla warfare continues.

If only two elements had to be retained, it would be Judith’s long dress and the female characters’ hair. These two components, especially not incidental to the aesthetics of Pina Bausch, who saw life in evening dress and never accepted that the dancers cut their hair, hem the subject. From the outset, Judith’s piece of pink fabric has lived a lot, dragged everywhere. Her shoulders fall askew, the neckline in the back is gaping… As for the hair of the dancers, they serve as erotic assets, compulsive objects that we comb to tear the skin off our skulls, but also as a curtain to veil their face and hide themselves from view. They also compose, sometimes, bushes of hair beautiful like a pack.

Surprisingly, when, in 1998, at the request of Pierre Boulez, Pina Bausch staged again, and by smoothing it, the score of Bartok, at the Festival d’Aix-en-Provence, she confided that the most difficult, for she, had been “not to burst out laughing, shouting”. What we take here precisely with us, as well as the rustle of dead leaves, leaving the living room populated by the corpses of Bluebeard.