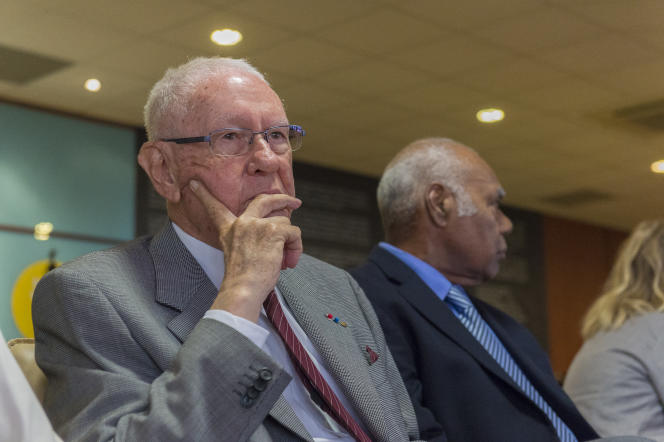 Jean Léques, emblematic mayor of Nouméa from 1986 to 2014, died at the age of 90, Agence France-Presse (AFP) learned on Wednesday May 31 from his family. Weakened for several years, he died “peacefully” at his home.

Withdrawn from political life since 2014 after 28 years at the head of the Caledonian capital, Jean Lèques was also the first president of the collegiate government resulting from the Nouméa agreement, from May 1999 to March 2001.

Signatory of this agreement, which organizes the decolonization of New Caledonia in stages, Jean Lèques is a figure in New Caledonian political life in which he was involved at the dawn of the 1970s. A man of dialogue, he had also signed the Matignon agreements, which brought peace to the archipelago in 1988. Elected for the first time in 1967 to the Territorial Assembly, he was re-elected in this institution, renamed Congress in 1989, without interruption until 2009.

Chairman of the Committee of Elders

A fervent Catholic, this Christian democrat had first been active in the progressive and multiracial Union Calédonienne (UC), before joining the ranks of the Rassemblement pour la Calédonie dans la République (RPCR affiliated to the RPR) in 1978 when the UC taken up the cause for the independence of New Caledonia.

One of his last political commitments was the presidency of a Committee of Elders, set up by former Prime Minister Edouard Philippe, to ensure that the campaign for the first referendum on independence in 2018 ran smoothly. committee also officiated in the 2020 and 2021 referendums.

Born on August 31, 1931 in the Vallée du Tir district of Nouméa, which he never left, Jean Lèques, nicknamed “Fifils” by all Caledonians, was from a family present on the Caillou since the end of the Nineteenth century. After studying law in mainland France, this American history buff had opened a notary’s office in Nouméa.

Honorary mayor of Nouméa since 2014, Jean Lèques had been elevated to the rank of Grand Officer of the Legion of Honor by the President of the Republic Emmanuel Macron, who presented him with this decoration in May 2018 during a trip to Nouméa.