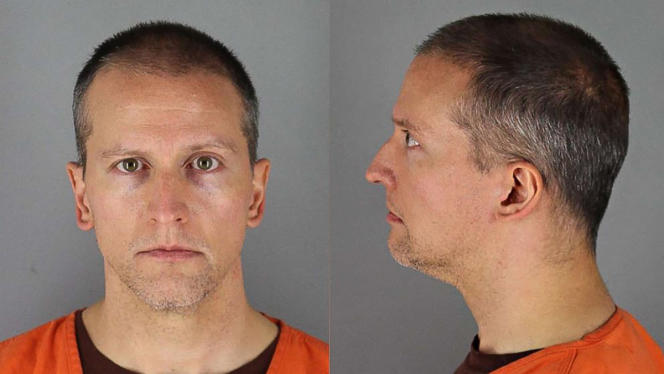 Derek Chauvin, a former Minneapolis City Police officer, was sentenced to 21 years in prison by a US federal court for violating the civil rights of George Floyd during his arrest. Minnesota Public Radio reports. He pleaded guilty in December 2021.

The 46-year-old former agent had previously been sentenced to 22.5 years in prison by a Minnesota state court for suffocating African-American George Floyd with his knee, but he appealed the sentence. sentence. The concurrent federal sentence is, for its part, final since it results from a plea agreement. It can be served at the same time as the other sentence, said Judge Paul Magnuson of the Saint-Paul court, giving him credit for the seven months already spent in detention.

“I don’t know why you did that, but putting your knee on someone’s neck until they die is wrong. And for that, you must be severely punished,” the magistrate explained to him. During a short intervention, Derek Chauvin wished the children of George Floyd to “succeed in life”, without apologizing or expressing the slightest remorse.

His mother Carolyn Pawlenty assured that he was not a heartless racist, before adding “all lives matter, regardless of their skin color”, hijacking the slogan Black Lives Matter (“Black lives matter” ). Called to the bar, the deceased’s brother, Philonise Floyd, demanded “the maximum sentence” against Derek Chauvin, saying he had not slept since the tragedy.

On May 25, 2020, Derek Chauvin, a seasoned Minneapolis police officer, knelt on the African-American’s neck for nearly ten minutes, indifferent to the interventions of panicked passers-by and the groans of George Floyd. The scene, filmed and posted online, sparked huge protests against racism and police brutality across the United States and beyond.

During a well-attended trial in Minnesota state justice in the spring of 2021, his lawyer pleaded that George Floyd died of an overdose, combined with health problems, and assured that Derek Chauvin had done justified use of force. He had not convinced the jurors and the former police officer had been found guilty of murder and sentenced to twenty-two and a half years in prison. He appealed against this verdict.

At the same time, federal justice had opened its own proceedings by indicting him, as well as his three former colleagues, for “violation of the constitutional rights” of George Floyd, more particularly “the right not to be the victim of an unreasonable use of force by a policeman”. These “double” lawsuits are allowed in the United States, but relatively rare, and reflect the importance of this case which has reopened a fiery debate on the racist past of the United States.

In the federal case, George Floyd first pleaded not guilty, before changing strategy in December 2021, admitting some responsibility for the first time. In his guilty plea, he admitted to using force, “knowing it was wrong” and “without legal justification”.

He had also acknowledged wrongdoing in the violence inflicted on a 14-year-old black teenager in 2017, whom he had kept on the ground under his knee for a quarter of an hour.

In exchange for his admission of wrongdoing, it was agreed that Derek Chauvin would serve his sentence in a federal prison rather than the state’s maximum security prison, where he is currently being held in solitary confinement to protect him from other prisoners. .

The other three agents, who remained passive during the ordeal of George Floyd, were found guilty in February in federal justice, but their sentence has not yet been pronounced. State justice also charged them with complicity in murder. One of them, Thomas Lane, pleaded guilty and will be sentenced on September 21. The trial of the other two, Tou Thao and Alexander Kueng, is due to begin on October 24.