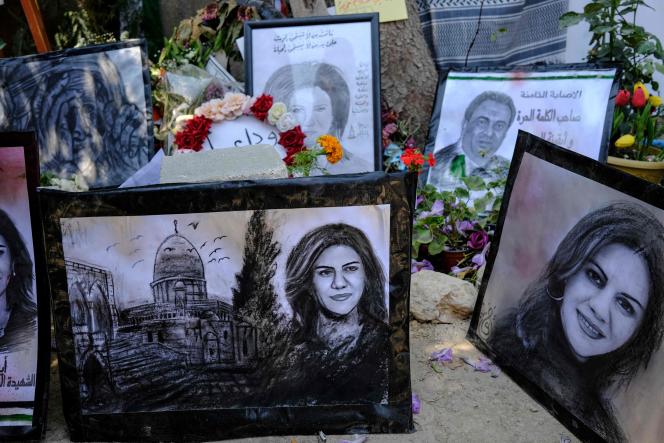 The Israeli army said on Monday May 23 that if one of its soldiers had fired the bullet that killed Palestinian-American journalist Shireen Abu Akleh in the occupied West Bank in mid-May, it did not appear, according to her. , guilty of a crime.

After the preliminary investigation, the Advocate General of the Army, Yifat Tomer-Yerushalmi, considered that “given that Mrs. Abu Akleh was killed in the middle of an intense combat zone, one cannot suspect of criminal activity in the first place, in the absence of further evidence”. The opening of a criminal investigation depends on the availability of other elements from “the investigation of the army and other sources”, she added.

Israel initially claimed that the Al-Jazeera journalist – who wore a bullet-proof vest with the inscription “press” and a reporting helmet during an Israeli raid on the Palestinian refugee camp in Jenin – had “probably” succumbed to Palestinian fire. The country later announced that it was not ruling out the possibility that the bullet was fired by its soldiers.

Investigation of the “Circumstances of the Incident”

Last week, she claimed that during the exchange of fire between soldiers and Palestinian gunmen “a soldier fired a few bullets from a [army] vehicle using a telescopic sight at a Palestinian man. who was shooting at the aforementioned vehicle”.

The army assured on Monday that it was making “every effort to examine the circumstances of the incident in order to understand how Ms. Abu Akleh was killed” and again criticized the Palestinian Authority’s decision to retain the fatal bullet. “The inability to inspect the bullet…continues to cast doubt on the circumstances” of the incident, the military said.

Palestinian President Mahmoud Abbas said he held the Israeli authorities “fully responsible” for the journalist’s death and refused a joint investigation with Israel: “The Israeli authorities committed this crime and we do not trust them”, he said. Al-Jazeera also accused Israeli forces of “deliberately” and “cold-blooded” killing of its star journalist.

The Palestinian Authority writes to the ICC

On Monday, the Palestinian Foreign Ministry said in a statement that it had sent a missive to the International Criminal Court (ICC) on the “execution by the [Israeli] occupier” of Shireen Abu Akleh, urging it to ” expedite investigations and bring criminals and murderers to international justice.”

The death of this reporter, icon of Palestinian journalism, aroused a wave of emotion in the Palestinian territories, in the Arab world, where her reports have been followed for more than two decades, in Europe and in the United States. Thousands of Palestinians from the West Bank paid tribute to him at his funeral, upset by violence by the Israeli police.

According to RSF, 35 journalists have been killed while practicing their profession in Israel and the Palestinian territories occupied since 2000. The Israeli army has never acknowledged any responsibility.