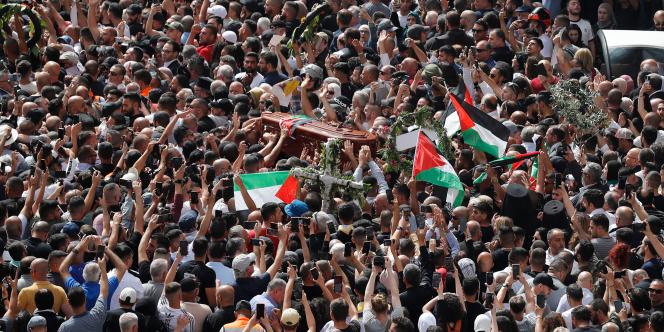 Violence erupted on Friday, May 13, in the grounds of a hospital in Jerusalem after the coffin of Palestinian journalist Shireen Abu Akleh was released.

Footage broadcast by local television shows the coffin of the star reporter for the pan-Arab channel Al-Jazeera, killed in an Israeli raid in the occupied West Bank on Wednesday, nearly falling to the ground as Israeli police disperse the crowd brandishing Palestinian flags.

Israeli forces broke into the grounds of St. Joseph’s Hospital in East Jerusalem, a Palestinian area of ​​the city occupied and annexed by the Jewish state.

Wave of emotion in the world

“If you don’t stop these nationalist chants, we will have to disperse you using force and we will prevent the funeral from taking place,” an Israeli policeman shouted through a megaphone to the crowd, according to a video disseminated by the police. According to her, “hundreds of people” gathered at the hospital and stones were thrown at the police who were “forced to use riot dispersal means”.

Shireen Abu Akleh’s coffin was eventually transported to the Old City, where a mass is celebrated in a church, before burial in a nearby cemetery.

The death of this reporter, icon of Palestinian journalism, aroused a wave of emotion in the Palestinian territories, in the Arab world where her reports have been followed for more than two decades, in Europe and in the United States.

Shireen Abu Akleh, a 51-year-old Christian Palestinian who also holds US citizenship, was shot in the head while covering an Israeli operation in the Jenin Palestinian refugee camp in the northern West Bank.

Israel, after saying that she “probably” succumbed to Palestinian gunfire, said it did not rule out that the bullet was fired by its soldiers. The Palestinian Authority, Al-Jazeera and the Qatari government accused the Israeli army of killing her.