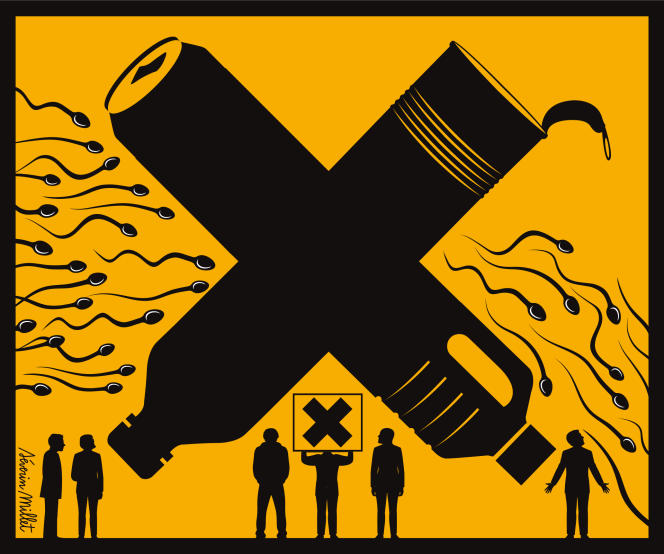 The rapid decline in human fertility is, in itself, an indication of the close links between the health of populations and the quality of their environment in the broad sense. British and Danish researchers highlight it again in a study published Thursday, June 9 by the journal Environment International. Led by Andreas Kortenkamp (Brunel University, London) and Hanne Frederiksen (Rigshospitalet, University of Copenhagen), the authors present the first risk assessment, with respect to male fertility, of mixtures of everyday pollutants.

They have thus managed to prioritize, among the substances most suspected of harming the quality of human sperm, the most decisive in the current decline. Plastics hold the upper hand by far. Bisphenol A (BPA) and its substitutes (BPS, BPF) are the substances that weigh the most. They are followed by polychlorinated dioxins and other plasticizers (phthalates), certain parabens and paracetamol. According to the researchers’ estimates, the median level of combined exposure of the general population to these products is about twenty times higher than the risk threshold.

The fall in male fertility has been a phenomenon identified for thirty years. A variety of factors – diet, smoking, stress, exposure to some common chemicals, etc. – is suspected to be involved. “For thirty years, numerous studies have been carried out around the world to measure the characteristics of human sperm, explains Pierre Jouannet, professor emeritus at the University of Paris-Descartes, one of the great pioneers in this field of research. The most serious of them show a decline in sperm quality, especially in the most economically developed countries. »

The numbers are striking. The most exhaustive synthesis published to date dates back to 2017. Conducted by the team of Shanna Swan (New York University) and published in the journal Human Reproduction Update, it indicates that the average concentration of spermatozoa in Western men is dropped from 99 million to 47 million spermatozoa per milliliter between 1973 and 2011. A drop of 50% to 60% in less than forty years.

Other, more recent data indicate that the problem is far from a thing of the past. In 2019, the team of Ashley Tiegs (Thomas Jefferson University, in Philadelphia) published in Urology a study of 120,000 American and Spanish men from couples who consulted a center for assisted procreation. Among this sample, the proportion of men with less than 15 million motile sperm per milliliter increased from 12.4% to 21.3% between 2002 and 2017. An increase of nearly 10 percentage points in fifteen years. , within this population subgroup.

To stem this trend, identifying the relative weight of the various factors of this decline is crucial. “Determining the role of chemicals is particularly difficult to assess,” says Jouannet. Indeed, apart from accidental massive exposures, human beings are generally only exposed to low doses of very many chemical products, and it is not known whether the combination of action of all these products exacerbates or not their possible individual effects. However, the just published work of Danish and British researchers “is particularly interesting in answering these questions”, adds Mr. Jouannet, who was not involved in this study.

The researchers first identified the substances likely to disrupt sperm production by different biological mechanisms (inhibition of the production of certain hormones, substitution for other hormones, etc.), the effect of which has been observed in vivo, on mammals or humans. “We only selected substances for which there is a high level of evidence of impact on sperm production,” says Kortenkamp. We have thus included a total of twenty-nine substances, but this is likely to underestimate the magnitude of the problem. It would almost certainly be worse by factoring in other factors like air pollution, etc. »

The omnipresence of plastic in question

For each of these twenty-nine molecules – plasticizers, organic environmental pollutants, pesticides, drugs, flame retardants, etc. –, the authors noted acceptable exposure levels in the available literature. Then, based on urine samples taken from a hundred Danish volunteers and available European biomonitoring studies, they estimated the exposure of the population to these twenty-nine endocrine disruptors.

“We then reported the estimated population exposure for each substance at the level at which effects no longer occur,” says Kortenkamp. What we show is that the combined exposure to this large number of products greatly exceeds this safety threshold. We are talking about a median exposure that exceeds the acceptable exposure by a factor of 20. The most exposed individuals in our sample are up to 100 times above this threshold. It is considerable. »

The results also make it possible to prioritize the impact of the substances identified. “We were very surprised to see the determining weight of bisphenol A,” says Kortenkamp. We rather expected a dominant effect of phthalates, which have been the subject of a very large number of studies. In both cases, it is the omnipresence of plastic that is in question. Bisphenols are used in food containers, resins sheathing the inside of certain tins or cans, thermal papers, etc.

Exposure of the population, in particular through food and water, is widespread. Phthalates, used in particular to give flexibility to plastic materials, are also ubiquitous. Dioxins, on the other hand, come partly from the combustion of waste: they permeate the environment and then pass through the food chain by accumulating in animal fats.

“Our analysis is predictive”

Another source of surprise is the likely role played by the most common painkiller currently on the market, paracetamol. Not that it is necessarily harmful to the fertility of men who use it sporadically: the major effects occur during the development of the genital tract, in utero, explains Mr. Jouannet in essence, when pregnant women use this drug. In September 2021, a group of researchers had already launched, in the journal Nature Reviews Endocrinology, an alert about this painkiller, recommending that it not be used without a medical prescription by pregnant women.

In general, the results of Andreas Kortenkamp and his co-authors do not make it possible to make a link between the exposure of the volunteers enrolled in the study and their own fertility, because it is that of the mothers, during their pregnancy, which is decisive, as well as exposures occurring during the perinatal period. Data that is generally impossible to obtain – except by going back in time.

Other long-term work would therefore be necessary to obtain definitive evidence on humans, followed from the fetal stage to adulthood. Researchers don’t disagree. “Our analysis has a predictive character that could be verified in adequate epidemiological studies on sperm quality,” they write in their paper. However, regulatory measures such as banning BPA in food contact materials should not be delayed until such verifications are available, which may take some time. In 2015, France was the first country to take such a measure – the replacement of BPA by other bisphenols, however, may have compromised some of the expected health benefits.