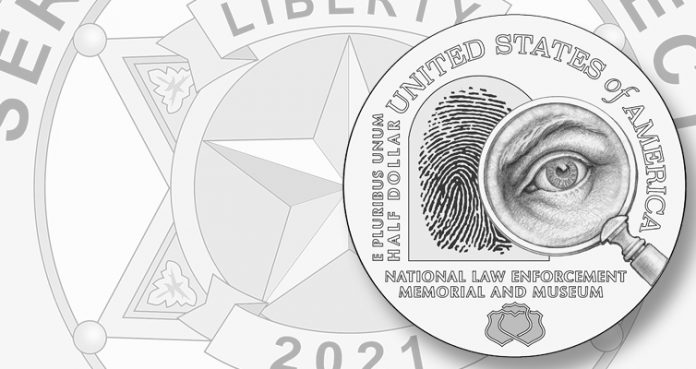 Public Law 116-94 authorizes the manufacturing from Proof and Uncirculated variations combined up to 50,000 gold 5 coins, 400,000 silver dollars and 750,000 copper-nickel clad half dollars.

AIP Designer Ron Sanders made the golden coin’s reverse, that has been sculpted by U.S. Mint Medallic Artist Craig Campbell. The plan depicts a folded flag with three roses under, representing remembrance.

Morris also implemented that the silver dollar obverse design, also sculpted by Hemphill. The plan depicts a police officer kneeling near a kid who’s studying a book and sitting on a basketball, representing support into the community and future generations.

The silver dollar’s reverse was created by Sanders and sculpted by U.S. Mint Medallic Artist John P. McGraw. The reverse design features a handshake between a law enforcement officer and also a part of the general public, representing the job law enforcement officers perform inside their communities to improve security through trusting connections.

Sanders also implemented the accepted layout for its half dollar, which was sculpted by McGraw. The plan depicts a sheriff’s star, representing the neighborhood served by law enforcement officers as well as the significant role they perform.

The reverse design was implemented by AIP designer Heidi Wastweet, a former member of the Citizens Coinage Advisory Committee. Wastweet’s layout, sculpted by U.S. Mint Medallic Artist Renata Gordon, reflects a watch at a magnifying glass poised above a fingerprint. It defines the human side of justice,”a reminder that law enforcement isn’t just officers on the road, but also many others behind the scenes. Additionally, it features the logo of the National Law Enforcement Museum.”

Surcharges will be added to the cost of every commemorative coin — $35 for the $5 coin, $10 for its buck and $5 to the half dollar.

The internet surcharges, following the Mint has recouped all its manufacturing and related costs, should be paid into the National Law Enforcement Officers Memorial Fund Inc. for instructional and outreach programs and shows.

The new app is the second using a similar motif.