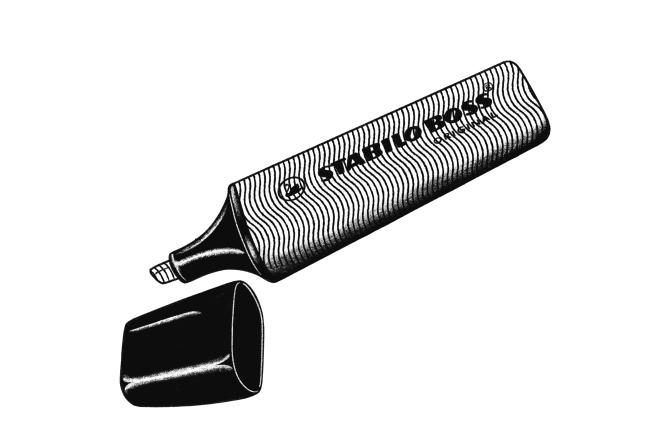 At Dominique de Villepin, the Stabilo Boss highlighter is a matter of political filiation. The grandson of teachers, his mentor Jacques Chirac hid a handful of these sticks in the bottom of his satchel, which leave a fluorescent trail on the paper. Before him, General de Gaulle was in the same spirit, punctuating the documents he consulted with a line of colored felt-tip pen.

Quai d’Orsay, the film by Bertrand Tavernier (2013) adapted from the comic strip of the same name published in 2010 by Dargaud, highlights the highlighter obsession of the man who was Minister of Foreign Affairs (2002-2004) then Prime Minister (2005-2007). The character (very) inspired by Dominique de Villepin, aka “DDV”, enthusiastically “stabiloses” his fascination with words, his baroque passion for politics, his penchant for sleeve effects and exalted quotes. Reports, notes and whole books are repainted with a feverish hand. It’s about giving light, “forging a vision”.

In real life, the Stabilo Bosses were lined up at attention on the minister’s desk, ready to pop their hoods and do their job. Invented in Germany in the early 1970s, the object is aimed at important people – hence its name – who have to read a lot and quickly. Foresighted, the DDV assistant always kept a supply of Stabilo for the boss. If necessary, a stroke of blue felt-tip pen – respect, sir! – could come and pass a second coat to magnify the passages that deserve it.

“An Instrument of Editing”

“This item is like a magic wand. It is a kind of editing tool that allows you to write your own book in the book, like the sculptor carves the stone. For Dominique de Villepin, ‘stabilising’ means soaking up a thought”, explains the author and director Antonin Baudry, former member of the minister’s cabinet and scriptwriter of the comic strip Quai d’Orsay under the pseudonym of Abel Lanzac.

Objection: By constantly highlighting, what’s left to highlight? Would too much Stabilo kill the Stabilo? Nay, scoffs the highlighter fanatic. According to him, a completely warped work because methodically coated with yellow ink is an obvious guarantee of quality. “During parliamentary question sessions to the government, if the files written for the minister did not come back to us fully colored, it means that something was wrong”, recalls Antonin Baudry.

Worse, however, for DDV was that a “fluffy” Stabilo. That he pales, loses his luster and balks at the moment of illuminating with a phosphorescent aura a word or a thought capable of feeding that of the thunderous Minister of Foreign Affairs. Beware, then, of the diplomatic incident.

News Editor - July 17, 2022 0
At Dominique de Villepin, the Stabilo Boss highlighter is a matter of political filiation. The grandson of teachers, his mentor Jacques Chirac hid a...