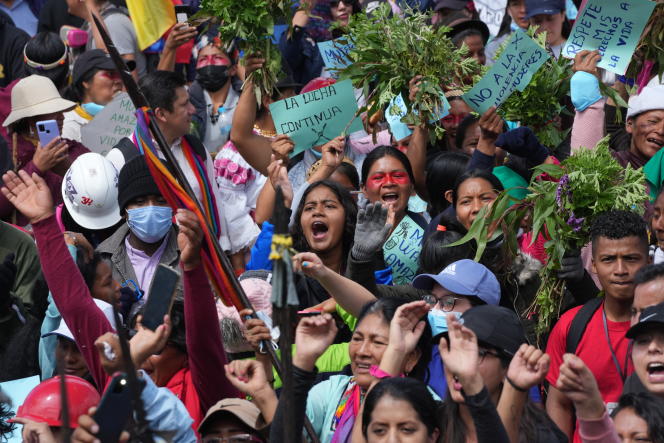 Ecuadorian deputies began to debate on Saturday, June 25, a procedure filed by the opposition to dismiss conservative President Guillermo Lasso, who ended the same evening the state of emergency decreed a week ago for attempt to contain indigenous protests against the cost of living. At the request of MPs supporting former Socialist President Rafael Correa (2007-2017), the unicameral Parliament began meeting virtually after 6 p.m. local time.

“135 [out of 137] members of the Assembly” are participating in this session, Parliament said on its Twitter account. They discuss the removal of Guillermo Lasso due to a “serious political crisis and internal unrest” in the country. The opposition, in the majority but divided within the Assembly, blames the president for the crisis that has shaken the country since June 13, with daily demonstrations and street blockades.

In power for a year, the latter will be able to speak to the deputies, even if it has not been specified in what form, the head of state having recently been diagnosed positive for Covid-19. After the debates, MPs will have 72 hours to vote. A majority of 92 votes out of 137 is required for the impeachment process to pass.

End of a week of state of emergency

On Saturday evening, President Lasso ended a state of emergency declared eight days ago in six of the country’s 24 provinces most affected by protests, according to a new decree issued by the president’s office. It notably provided for the mobilization of the army and a seven-hour night curfew for three provinces, including Pichincha, whose capital is Quito.

Nearly 14,000 indigenous demonstrators are mobilized across the country to protest against the rising cost of living and demand in particular a drop in fuel prices, according to the police, who estimate their number at nearly 10,000 in the capital .

These debates open on the very day of a first attempt at dialogue between leaders of the indigenous movement and several government ministers, under the auspices of the President of Parliament Virgilio Saquicela. “We asked for a dialogue to be opened. (…) This dialogue has started, there has been no commitment whatsoever, but simply the decision of Conaie [an indigenous organization spearheading the protests] to consult its base to appoint a commission to start this dialogue”, explained Mr. Saquicela to the press, judging that “the government has shown itself to be open”.

On Friday, President Lasso, who recently received support from the army, accused the protesters of wanting to “perpetrate a coup”.

The violence left six people dead and dozens injured. Quito is largely paralyzed and its access blocked by numerous roadblocks. The demonstrators tried twice, Thursday and Friday, to enter the National Assembly compound, from where they were repelled by the police.

On Saturday morning, hundreds of indigenous women held a traditional ritual in northern Quito, before marching with anti-government slogans. “The basic food basket is very expensive and our agricultural products (…) are worth nothing,” said Miguel Taday, 39, a potato farmer in Chimborazo (South). “We will continue to fight here, until the last consequences,” said Wilmer Umajinga, 35, who has been protesting in the capital since Monday.

In Quito, residents are expressing their weariness with closed stores and shortages of certain products. Counter-demonstrations were staged to cries of “Leonidas Iza [the leader of the protesters], get out!” »