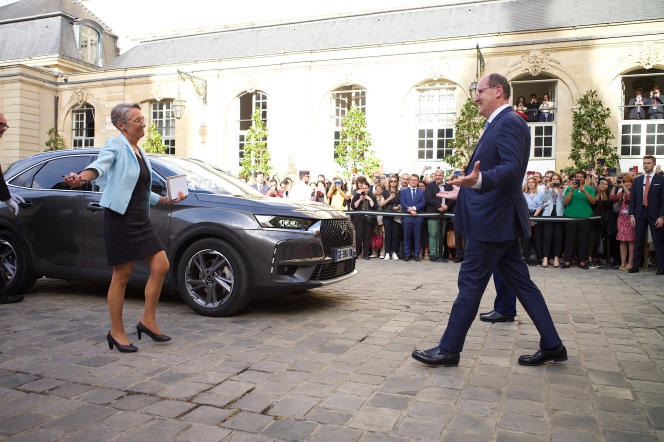 “Continuation of social and ecological mistreatment”, “social rampage”, “businesswoman at the service of the presidential project”… The reactions of political leaders were numerous after the announcement of the appointment of Elisabeth Borne at Matignon. First to react, Jean-Luc Mélenchon held a press conference just after the formalization of the choice of Emmanuel Macron. According to the head of La France insoumise and craftsman of the New Popular Ecological and Social Union (Nupes), Ms. Borne “will embody the continuity of the policy of the President of the Republic and the previous prime ministers of the first five-year term”.

“So it’s sort of a new season of social and ecological abuse that’s starting. His appointment begins from the first moments with a kind of attempt at deception. Ms. Borne would be a leftist, so maybe she can think so, but we don’t give her that label,” Mr. Mélenchon said.

“We cannot forget that she is personally responsible for the fact that a million unemployed people now have their benefits reduced by more than 17% at an already difficult time and that this reform of unemployment benefits, after having failed two time on the decisions of the Council of State, was taken without any consultation leading to an agreement with any union whatsoever, “said Mr. Mélenchon.

“Ms. Borne was the person who opened up rail and transport to competition and changed the status of railway workers, just as she was the woman who opened the RATP to competition,” he said. he still judged. “Ms. Borne is the continuation of the social and ecological mistreatment of the entire Macronist period of the first term”, further estimated Jean-Luc Mélenchon, offering him “a public debate”.

“Macron has found his Mrs. Thatcher”

Ally of the Nupes, alliance of the left in view of the legislative elections of June 12 and 19, the first secretary of the Socialist Party also quickly commented on the appointment to Matignon of Elisabeth Borne, who until now was Minister of Labor in the government of Jean Castex. “Positive point, a female PM [Prime Minister]”, writes Olivier Faure at the beginning of his message published on Twitter, before continuing: “For the rest… Appointment of the Minister of Transport who dismantled the public rail service, the ecology condemned for climate inaction, of the work which despoiled the unemployed with the reform of unemployment insurance”.

Fabien Roussel, communist deputy from the North and former presidential candidate, wrote on Twitter that “with Elisabeth Borne Macron has found his Mrs. Thatcher. Technocracy in the service of money king”. “Privatization and competition between the SNCF and the RATP, reform of unemployment insurance to the detriment of more than 1 million beneficiaries, gravedigger of Fessenheim”, criticized Mr. Roussel.

In a press release, the Europe Ecologie-Les Verts (EELV) party welcomed the arrival of Elisabeth Borne at Matignon, sent her “republican congratulations” and “can only be delighted to see” a woman at the Elysée. . However, the ecological party denounces the results of Ms. Borne, who “failed to put France on the path necessary to respect the Paris agreement”.

During her time at the Ministry of Labor, “she perpetuated a brutal policy towards the most vulnerable people in the country, including the implementation of the unemployment insurance reform”, denounces the party. Regarding the policy it will pursue, EELV regrets that it “agrees to conduct a policy that will lead to retirement at 65, a deeply unfair measure”. “Gathered together, the union of the left and environmentalists can create surprise and hope to change the future and the lives of French people,” the statement concludes.

“Change everything to change nothing”

Another critical look, that of Marine Le Pen, the presidential finalist: “Emmanuel Macron demonstrates his inability to unite and the will to pursue his policy of contempt, deconstruction of the State, social destruction, tax racketeering and laxity” by appointing the former Minister of Labor as Prime Minister, tweeted the former candidate of the National Rally, alluding in particular to the reform of unemployment insurance from the previous five-year term.

Valérie Pécresse, ex-candidate of the Republicans (LR) for the presidential election, sent “all [s]republican congratulations to Elisabeth Borne”. “She unquestionably has the journey of commitment necessary to become our country’s second female prime minister. I wish him the best for France, ”wrote the president of the Ile-de-France region on Twitter.

Christian Jacob, the president of the LR party, was less tender: “Change everything to change nothing. Three weeks of dithering and small arrangements, without vision or perspective. With the appointment of Elisabeth Borne, we leave with the same. Eric Ciotti, LR deputy for the Alpes-Maritimes, estimated that “Macron has just chosen a socialist technocrat as prime minister”. “Back to square one, he started on the left and will finish on the left. Humiliation for those who thought he was going to pursue a right-wing policy. Sad thoughts for those who believed in him,” pointed out the former finalist at the LR convention.

Patrick Mignola, president of the Democratic Movement (MoDem) and related democrats group in the National Assembly, welcomed the decision of the President of the Republic to appoint Elisabeth Borne to Matignon. “The Democratic deputies have been able to appreciate, during the legislature which is ending, her ability to put her skills as a servant of the State and a businesswoman at the service of the presidential project and strong commitments on ecological issues and social,” wrote the MP for the fourth constituency of Savoie.

“With Ms. Borne, each file is important and each interlocutor respected: it is with this method that she has brought about several major reforms which seemed impossible to implement (energy transition, SNCF, unemployment insurance)”, further considers the elected MoDem, who belongs to the presidential majority. “She will be up to the challenges ahead and we have no doubt that she will approach them with the same sense of consultation with parliamentarians, intermediate bodies and all French people,” said Mr. Mignola.