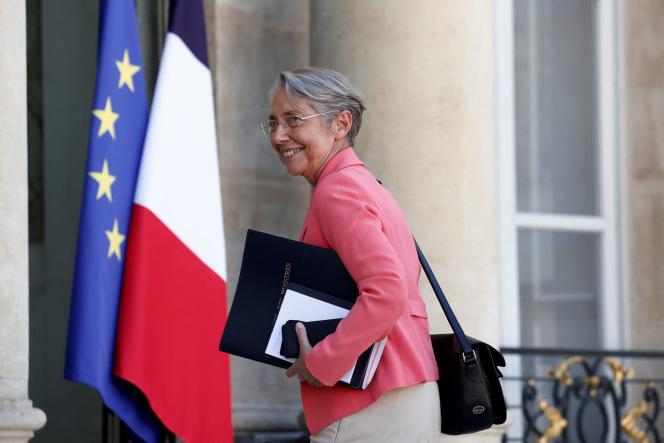 Elisabeth Borne has decided. The Prime Minister has chosen not to solicit the confidence of deputies after her general policy speech which is to be delivered on Wednesday, announced the new government spokesperson, Olivier Véran, Monday, July 4, after the Council of Ministers. .

“Trust is not decreed a priori, it is patiently built text by text,” he explained. We are the only party able to have a majority in the National Assembly. No opposition can, even by allying with another opposition, be in the majority. For Mr. Véran, “the French have expressed themselves [four times] and they have given their confidence to the project presented by the President of the Republic and the presidential majority, so this project, we want to implement it”.

Asking deputies to vote for confidence after a declaration of general policy, in accordance with article 49.1 of the Constitution, is not an obligation. On the right, Maurice Couve de Murville (1968) and, on the left, Michel Rocard (1988), Edith Cresson (1991) and Pierre Bérégovoy (1992) had for example chosen not to engage the responsibility of the government.

Faced with a Chamber in which she does not have an absolute majority, Ms. Borne said she had been “thinking” for several days and had announced that she would make her “decision after consultations” with the opposition. The balance will have finally tipped in favor of limiting the risk of seeing its legitimacy tarnished by a vote that is too close, or even unfavorable.

La France insoumise (LFI) had reacted a few hours earlier, when BFM-TV announced the information, accusing the Prime Minister of “mistreating democracy”. “So we will bring you by force before the Parliament. From this Wednesday, we will table a motion of censure against the government “in order to provoke a vote, announced the president of the LFI group in the Assembly, Mathilde Panot.

“I am not surprised”, reacted Mr. Véran at the end of the Council of Ministers, seeing it as “a funny method”. “It’s not in my design to want to censor someone who hasn’t spoken yet,” he continued. Even before the Prime Minister has spoken in the Chamber, you have a part of this Chamber which considers that it should be prevented from advancing. While, according to him, “no one has an interest in blocking”, in a National Assembly where the presidential coalition has lost its absolute majority, the new government spokesman also said he was “convinced that he will not [there] will be no majority for this motion of no confidence”.

The tabling of a motion of censure requires the signature of fifty-eight deputies. The LFI group, which has seventy-five elected officials, is therefore able to file one on its own. To succeed, however, it will have to be adopted by an absolute majority of the members of the National Assembly. If that were the case, the prime minister would be forced to resign.

According to information from Le Monde, some, among the presidential majority, considered the filing of motions of censure by the opposition less risky than the vote of confidence. Their hope being that they fail and bring to light divisions between opposition groups.