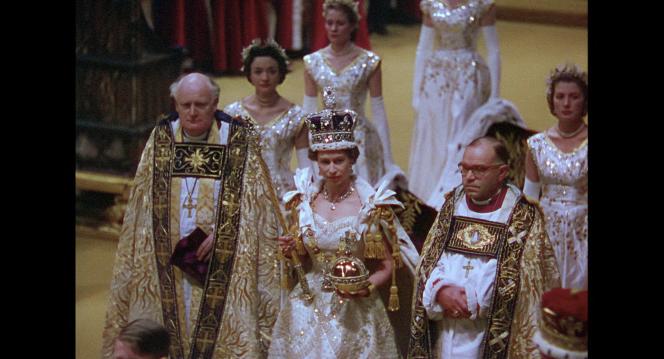 No one knows if the excitement of the platinum jubilee, the celebration of the seventy years of reign of Queen Elizabeth of England, from June 2 to 5, will reach France. The fact remains that Roger Michell’s documentary in the form of a tribute, Elizabeth, singular regard (s), distributed by Pathé, will be released on Thursday June 2 in several hundred theaters. Born in 1956, and died on September 22, 2021, the British director of Love at first sight in Notting Hill (1999), with Hugh Grant and Julia Roberts, and more recently of The Duke (2020), still in theaters, did not hide his enthusiasm for “Her Majesty”, now 96 years old: “This British monarch is the only head of state to have lived and reigned so long in the world. She is more than that. It is anchored in our unconscious and our collective imagination. She is by far the most famous female face in world history. (…) And it is not necessary to be a monarchist to have the queen in mind, “explained the filmmaker in his notes of intent.

The film is an archival montage, without voiceovers or expert commentary or chronology, returning to the highlights of the life of Elizabeth, proclaimed queen on February 6, 1952, on the death of her father, George VI. The director opted for a light tone, which would try to answer this question, without ever really answering it: who is the Queen of England, what does she really think? How to explain such popularity, which has continued to grow over the years, as explained by historian Jane Ridley (Le Monde, February 2)?

With a certain sense of humour, Roger Michell mixes images from the royal archives, film extracts, sketches by comedians too, which compose an impressionistic and benevolent portrait of the lady with the hats. Many images of her travels, her visits to Commonwealth states, the Queen, through the ages, in her immutable outfits, greeting the people with a movement of the forearm, mechanical, or leaning to receive bouquets of flowers…

All in music, because His Majesty has also inspired singers, up to the Beatles. The documentary features the song Her Majesty (1969), written by John Lennon and Paul McCartney: “Her Majesty is a pretty nice girl/ But she doesn’t have much to say.” not much to say). We also learn that John Lennon, who received an Order of the Empire medal from the Queen in 1965, returned it in November 1969, “for a number of reasons”, we are told. , without further details.

All this is very nice, but necessarily repetitive (official trips, outings on horseback, carriages, trains, planes, etc.). The film is undoubtedly aimed at fans who already know the biography of their queen of hearts inside out and will be delighted to discover such a bouquet of memories, in black and white and in color, as one goes through an album.