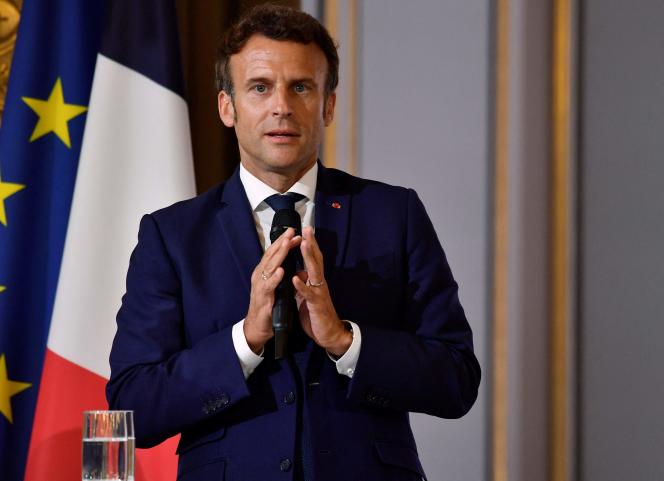 In an interview with several regional dailies, broadcast Friday evening, June 3, President Emmanuel Macron announced that he wanted to bring together after the legislative elections a “National Council for Refoundation” with the “political, economic, social, associative forces” as well as citizens. drawn, on the reforms affecting in particular purchasing power, ecology, institutions and pensions.

In this interview, the Head of State clarified:

“I carried five objectives during the campaign: independence (industrial, military, food…), full employment, carbon neutrality, public services for equal opportunities and democratic renaissance with institutional reform. To achieve them, I want to bring together a National Council for Refoundation, with the political, economic, social, associative forces, elected representatives of the territories and citizens drawn by lot. This advice, which I will launch myself, will be launched immediately after the legislative elections [of June 12 and 19]. »

He wants the Prime Minister, Elisabeth Borne, and her government “to be able to keep alive” this National Council for Refoundation, a nod to the National Council of Resistance (CNR) which coordinated the various movements of the French internal resistance during the second World War. “We live in a comparable time,” he said, thereby justifying this reference to the CNR. “We are in a historic era that requires a profound change of model. And then the war is there [in Ukraine]. »

Pension reform in force “from the summer of 2023”

The president specifies that there will be “a first sequence of several days, then regular meetings” and that the first will relate to purchasing power, the number one concern of the French. “We are going to provide answers to civil servants with the index point, to retirees… As of this summer, the law [concerning] purchasing power and a text of simplification and urgency for energy projects will be voted, he specifies. We will [then] begin the major projects: production, ecology, public services. »

Regarding the food check, he explains that the device “must be simple” so that this check is “paid in one go” and that “then we will have to go to more targeted devices such as on gasoline, with a device for the big rollers this fall”. In this regard, the 18-cent fuel rebate will be extended in August, he confirmed. “There has to be visibility for our compatriots. I give it to you. »

“As for the work on the pension reform, which is essential to the financing of our transformations, it will begin after this [national refoundation] council and the reform will come into force in the summer of 2023”, declared the head of the State.

On school and health, it provides that “our objectives and means will be defined” within this council before “discussions”, which will be carried out from September, “on the ground, in the 1,200 basins of life, in which all stakeholders will be involved”. “The French are tired of reforms that come from above,” insists Emmanuel Macron.

Putin made “a historic mistake”

The French president said on Friday that his Russian counterpart, Vladimir Putin, had made “a historic and fundamental error” by attacking Ukraine. “I think he isolated himself. Locking yourself in isolation is one thing, knowing how to get out of it is a difficult path, ”said Emmanuel Macron.

The French president reiterated that “Russia should not be humiliated” – remarks very badly perceived in eastern Europe – “so that, the day the fighting stops, we can build a way out by diplomatic channels”.

Urged to go to Kyiv, when many of his European counterparts have already been there, he replied:

Today, I’m not ruling anything out.

“We want to increase financial and military support for Ukraine. And finally, do everything to get cereals out of Ukraine,” he added, contradicting Vladimir Putin, for whom the export of these cereals is “not a problem. »

Deliveries by France of Cesar cannons to the Ukrainian army will be “compensated”, he further specified. “I asked our industrialists to accelerate the production of armaments, it is not only a question of replenishing our stocks, but also of strengthening our independence”, insisted the head of state.

“A Project of Disorder and Submission”

“I see in the project of Jean-Luc Mélenchon or Mrs. Le Pen a project of disorder and submission. They explain that we must get out of our alliances, of Europe, and build strategic alliances with Russia. It’s submission to Russia, “said the president.

According to the Head of State, the program of Nupes, the new union of the left forged by Mr. Mélenchon, uses “twenty times the word ‘taxation’ and thirty times the word ‘prohibition'”. “It’s a freedom project, no doubt? That’s not going to drive people crazy, is it? “, he asks.

I hope that, in the continuity of the presidential election, the French will choose solidity, a stable and serious majority to protect them in the face of crises and to act for the future.

While Jean-Luc Mélenchon wants to become “prime minister” if Nupes obtains a majority in the legislative elections, Emmanuel Macron says: “It is rare to win an election in which you do not show up. The president chooses the person he appoints as prime minister by looking at parliament. No political party can impose a name on the president. »

On the institutions, Emmanuel Macron specifies that he will set up the cross-party commission “as of this fall”, and that he wishes to “launch [the] reform” of proportional representation “in the fall” to “have the conclusions as early as 2023 “.

“We must restore vitality to our democratic debate”, underlines the president, who sees a “paradox in our societies, where the will to express oneself is very strong but with a disaffection for the elections”, the abstention having progressed in the last elections.

Emmanuel Macron said on Friday that he was “outraged” by the events at the Stade de France during the Champions League final on Saturday. “I have a thought for the families who have been pushed around, who have not been able to access the places they had paid for. That’s why I want us to be able to compensate them as soon as possible,” he said. “I have asked the government to determine the responsibilities and to explain them in great detail to our compatriots, to the British and to the Spaniards,” he repeated.

Roland-Garros: the semi-final between Ruud and Cilic interrupted by a climate...

News Editor - June 3, 2022 0
The scene left the spectators of the Philippe-Chatrier court stunned. Friday, June 3, the semi-final of Roland-Garros between the Norwegian Casper Ruud and the...

Antiquities trafficking: Jean-Luc Martinez relieved of part of his duties as...

Emmanuel Macron announces that he wants to convene a “National Council...

France-Denmark at the Stade de France: the management of fans scrutinized...