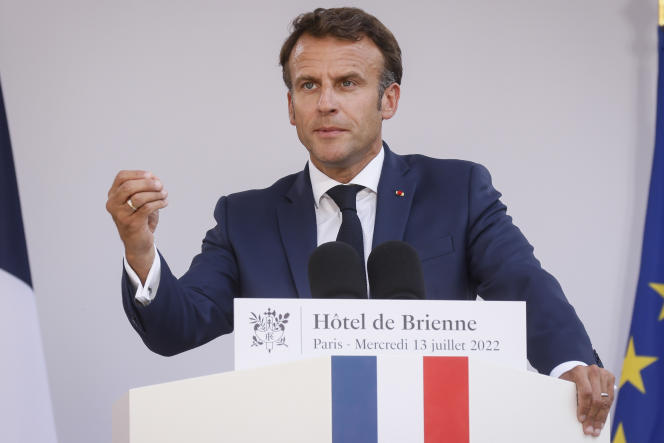 Obviously, the Universal National Service (SNU) has not yet found its place. French President Emmanuel Macron on Wednesday July 13 asked the French armies to “do more” to develop this presidential campaign promise aimed at young people, in order to mobilize “the whole of French society”.

The Universal National Service was launched in 2019. After an initial experiment with 2,000 young volunteers aged 15 to 17, then a session canceled in 2020 due to the health crisis, 15,000 young people took part in the summer of 2021 in cohesion courses throughout France. This year, UNS aims to reach 50,000 young people.

“I ask you to do more by giving our reserves a new ambition and by investing more and better in the great UNS project that I am carrying,” he said in a speech to the Ministry of the Armed Forces. “It is not a question of militarizing the youth, even less society, but at a time when the nation needs to find the salt of its history, its deep meaning (…), the Republic needs you to do more. »

The SNU takes place in several phases. For fifteen days, the young people first take part in a “cohesion stay”, a moment of collective life outside their department of origin. Then they must commit themselves to an association, an administration or a body in uniform, for a mission of general interest of 84 hours.

“These training schemes are opportunities for the young people entrusted to you,” insisted the president. “This is an essential focus for the coming months and years (…). We have to move forward,” he added, referring to the “values ​​of transmission and discipline” of the armed forces.

The SNU is far from unanimous among high school unions and in the armies already heavily employed on multiple fronts. The project continues to arouse distrust and perplexity because of its potential cost, the headache posed by the accommodation and supervision of hundreds of thousands of young people per year, or even its compulsory nature.

“The Elysée considers that it has not obtained enough political credit from the increase in the budget of the armies”, it is argued within the executive. “The armies do not want to be used for something that would take them too far from their mission”, recognizes the Minister of the Armed Forces, Sébastien Lecornu, in Le Figaro published on Wednesday. But “if the UNS is a way to cultivate a culture of resilience, to learn first aid, to have a military culture, the armies will be more open to it”, he wants to believe.