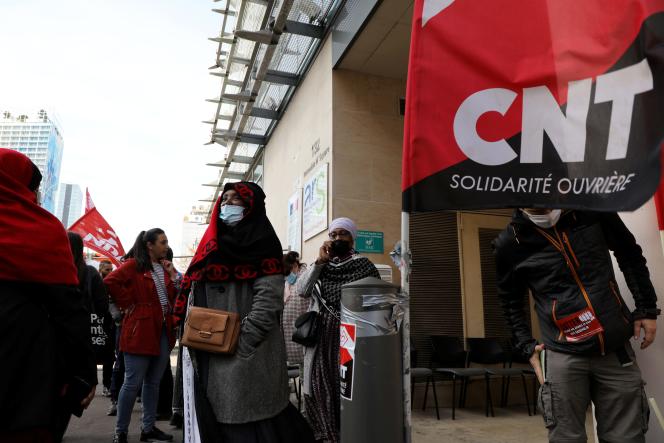 “Vacuuming, dusting, emptying trash cans, cleaning elevators, toilets, wiping mirrors… You have to be standing or stooping all the time. I have pain in my shoulders, in my legs. Fatima, 58, describes her daily life at Laser Propreté, which employs her two and a half hours a day to clean the premises of the regional health agency (ARS) Provence-Alpes-Côte d’Azur, in Marseille, for a salary of around 440 euros per month. Supported by the ARS unions, Fatima and her colleagues have been on strike since March 29, denouncing the work overload. A strike fund allows them to hold on.

Hailed as “essential” for the continuity of economic and social life during the Covid-19 pandemic, workers in cleaning companies have not seen their working conditions improve. Part-time work, atypical and fragmented hours, low wages despite a 5.5% increase in branch minimums in 2022, or even hardship remain the lot of staff in this subcontracting, which has been developing since the 1970s. This sector, which has a turnover of 15.4 billion euros, employs 550,000 employees in 14,000 companies, according to data for the year 2020 from the Federation of cleaning companies and associated services (FEP), employers’ organization representing 80% of the workforce.

Initiatives have been taken to improve the lot of these employees. On September 8, 2021, during a “progress conference” organized by the FEP, the latter called on public and private buyers to get out of the “low cost culture”, and in particular to promote daytime and continuous work. “During the Covid 19 crisis, our customers demanded that our teams work partly during office hours, in order to reassure their own employees so that they return to work, observes Philippe Jouanny, president of the FEP. But it’s over. The question of market prices is central, according to Christine Erhel, professor at the National Conservatory of Arts and Crafts and director of the Center for Employment and Labor Studies.

“Downward pressure from principals places a strong constraint on companies”, notes the co-author of a report on the recognition of “second line” trades (construction, road transport, cleaning, etc.) commissioned in 2020 by Elisabeth Borne, then Minister of Labour, and delivered in September 2021. The public sector is not exemplary, despite the recent circular, signed on March 16, by several ministers, including Ms. Borne, in favor of purchases responsible public. “Over the past two years, prices have fallen by 5.8%, calculates Mr. Jouanny. However, wages and social contributions represent 80% of the price. »

Ms. Erhel proposes that companies coordinate by adopting a “floor price”. Particularity of the branch: when a company wins a contract, it must take over the employees of its predecessor. But this transfer can have a setback. “In general, the renewal of the market is done for a lower price, which leads the provider to compress its costs and therefore to reduce the hours, thus intensifying the work,” observes François-Xavier Devetter, professor at the University of Lille, and Julie Valentin, lecturer at Paris-I-Panthéon-Sorbonne University, co-authors of the book Two million workers and dust (Les Petits Matins, 2021).

To reduce the hours, the new service provider will often resort to transfers, very badly experienced by the employees, because they upset the organization of their life, articulated around several jobs. With employees dispersed over several sites, the sector has experienced few strikes. So when they break out, it’s because the employees are exhausted. At the Marseille ARS, the cleaning staff was taken over on January 3 by Laser Propreté via the Union of Public Purchasing Groups (UGAP). The team went, through transfers and non-replacement, from eight to four employees, who “had to clean a floor and a half in three hours a day compared to one before”, deplores Camille El Mhamdi, lawyer at the National Confederation of Labor-Worker Solidarity union.

For any response to their letter of March 21 denouncing in particular the overload of work, the site manager, spokesperson for the team, was transferred, and an employee dismissed. Faced with this situation, the ARS finally decided on June 10 to break the contract with UGAP, according to a letter sent to the unions.

It is often risky to claim respect for one’s rights, such as that of being paid for every hour worked. Especially when “the subcontractor’s unions do not support the workers’ strike”, as was the case on the Jussieu campus of Sorbonne University in Paris, says Danielle Cheuton, of the Parisian cleaning collective CGT.

The non-payment of hundreds of hours and a project to fragment schedules had triggered a strike there in September by the cleaning employees of Arc-en-ciel (T2MC group), holder of the contract since February 2021. The movement rebounded in January, then died out. “There was retaliation,” according to Marie (her first name has been changed). Two team leaders active during the strike were fired.

The development of telework leads some companies to reduce their premises and therefore the surfaces to be cleaned, such as at Renault, which has decided to close part of the Technocentre in Guyancourt (Yvelines) on Fridays, since April 22, and to reduce its surfaces in Ile-de-France. The group has therefore reduced the contracts of all its service providers since May 20, resulting in the cleaning of several dozen job cuts.

At the Technocentre alone, the cleaning company PEI has eliminated a quarter of the 120 positions, notes Christian Morel, of SUD-Renault Guyancourt. Worried, 80 employees had been on strike since May 3, including Marie, very angry: “We are doing a difficult job. But we have no recognition,” she laments. An agreement was finally reached on June 3, providing in particular for a voluntary departure plan and a reorganization to avoid partial unemployment at PEI at the Technocentre and at other Renault sites. Requested on several occasions, none of the cleaning employers responded to requests from Le Monde.