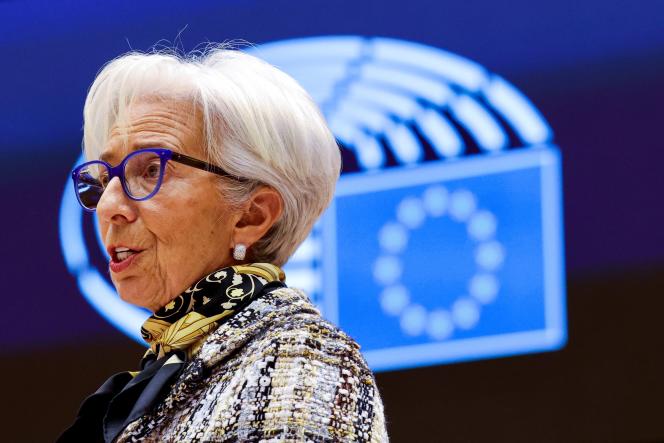 The day after the European Central Bank (ECB) meeting on Thursday, June 9, a cartoon in the German daily Handelsblatt showed Christine Lagarde desperately trying to close the door on a flood of water symbolizing inflation. The feet of the President of the ECB were on a European carpet which was gradually slipping away.

With eurozone inflation at 8.1% and soaring interest rates in financial markets, Ms. Lagarde is probably having her toughest moment since taking over as ECB helm in November 2019. She is playing her mandate right now, depending on how she gets out of this crisis,” said Ludovic Subran, chief economist at Allianz. “It’s its stress test” (referring to the “stress tests” that the ECB puts banks through to measure their soundness), adds Aurore Lalucq, MEP (Place Publique), member of the Committee on Economic and Monetary Affairs and who, as such, auditions Ms. Lagarde several times a year.

When the Frenchwoman arrived at her post, the very masculine microcosm of central bankers wondered: here was someone who was not from the seraglio, not an economist by training and who was to replace Mario Draghi, a much admired technician. Would she be up to it?

“Keep a form of consensus”

An unfortunate sentence, uttered in March 2020, during the outbreak of the Covid-19 pandemic, reinforced doubts: “We are not here to reduce the ‘spreads’ [the difference between the German rate and the rates peripheral countries],” she said at the time. Hearing this, the markets had panicked, imagining that it indicated that the ECB could possibly let go – in the event of a crisis – of a vulnerable country, such as Italy.

Two years later, Ms. Lagarde has instead won favor with observers. “We are not on the same political side, but we must recognize that his situation is very complicated. I was afraid she wasn’t inventive enough, but she launched the asset purchase plan during the pandemic, and she advanced on the greening of monetary policy,” notes Ms. Lalucq, “I would rather benevolent, adds Eric Dor, from Ieseg, a business school. It collects crises [pandemic, then outbreak of inflation]. She was chosen for her talents as a diplomat, to bring together the members of the ECB. »

The Board of Governors, made up of twenty-five members, is indeed very disparate, between hawks and doves. “The challenge for her is to maintain a form of consensus, and she does that very well,” notes Mr. Subran. The problem is not Christine Lagarde, but the current economic situation. »