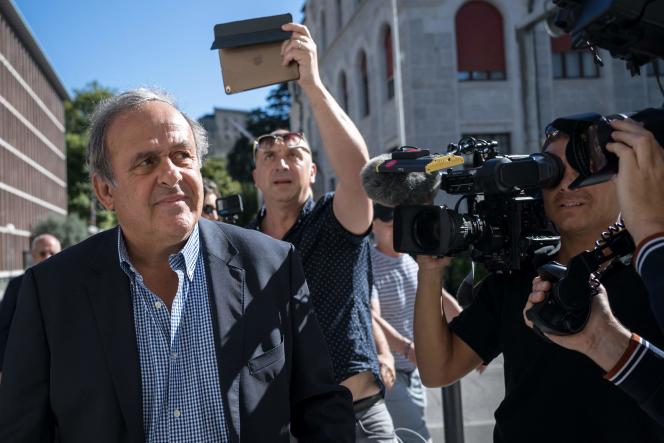 The verdict fell on Friday, July 8, at 10 a.m., in the great hall of the Swiss Federal Criminal Court (TPF) in Bellinzona, in the canton of Ticino. And it was a bombshell sent by the court of criminal cases: Sepp Blatter and Michel Platini were acquitted in the case of the alleged unfair payment of 2 million Swiss francs (1.9 million euros) that the first did the second, in February 2011.

The former Swiss president of the International Football Federation (FIFA), 86, and the former French boss of the Union of European Football Associations (UEFA), 67, have been acquitted of charges of “fraud , mismanagement, breach of trust and forgery in titles”.

The former number 10 of the Blues is also not required to return 2.229 million Swiss francs to FIFA, invited by the TPF to act by the “civil way”.

“My client’s full acquittal is the only correct outcome of these criminal proceedings,” said Dominic Nellen, Mr. Platini’s attorney. The court properly assessed the evidence and finally ended this unspeakable criminal proceeding. A neutral court finally found that no crime had been committed in this case. My client is completely whitened and relieved as a result. »

Representative of the Public Ministry of the Confederation (MPC) and responsible for investigating this case since 2019, the prosecutor Thomas Hildbrand had requested a suspended sentence of one year and eight months in prison and a probation period of two years against the two men. In November 2021, he had referred the duo to the TPF for “suspicions of fraud, unfair management, breach of trust and forgery in titles”.

In his indictment, Mr. Hildbrand accused the defendants of having “deceived” ex-FIFA chief financial officer Markus Kattner by sending a “fictitious invoice which did not correspond to an existing debt “. And this in order to “illegitimately enrich Mr. Platini” before the re-election of Mr. Blatter, in June 2011, for a fourth term, with the support of UEFA.

During his indictment, on June 15, the magistrate had torn to pieces the defense of the defendants in the case of the alleged unfair payment: he swept away the thesis of the “reliquat of wages” which would have been allegedly paid to the Frenchman for the years during which (1998-2002) he served as adviser to Sepp Blatter. The defendants claimed to have sealed, in 1998, an “oral agreement” fixing an annual remuneration of 1 million Swiss francs for Mr. Platini.

For Mr. Hildbrand, “no verbal contract existed either before or after Blatter’s election to FIFA [in June 1998], because it could not legally exist”. According to him, the two defendants initialed, in August 1999, a contract fixing the remuneration of the ex-player as “independent” at the height of the “salary of the Secretary General of FIFA”, at 300,000 Swiss francs annually.

For the prosecutor, this payment of 2 million was “perhaps the price for Mr. Platini’s silence in the context of the FIFA elections of 2011? “, during which Mr. Blatter was re-elected for a 4th term, in June 2011, with the support of UEFA and its president.

Despite “the absence of conclusive evidence” and motive in the indictment, the “question of whether this payment was in relation” to the June 2011 ballot “must remain open”, according to the magistrate.

For the prosecutor, these “2 million were a little extra sugar, a donation in exchange for a personal service” for Mr. Platini, who had already invoiced FIFA “3.8 million Swiss francs” from 1999 to 2002 ( travel expenses, bonuses, employee salaries, office rental in Paris).

The acquittal of Messrs. Platini relaunches the politico-judicial saga started in 2015 and constitutes a disavowal for the MPC and FIFA chaired by Gianni Infantino.

This case crushed Mr. Platini’s political ambitions and put his political career on hold. The opening of criminal proceedings by the MPC against Mr. Blatter in September 2015 led to the suspension of the FIFA President and the Frenchman by the FIFA Ethics Committee. Arch-favorite in the race to succeed the Swiss, Mr. Platini was then unable to run for the presidency of FIFA. It was his former right-hand man at UEFA, Gianni Infantino, who took the throne in February 2016.

In May 2016, the Court of Arbitration for Sport (CAS) in Lausanne lowered Mr. Platini’s disbarment to four years. This sanction was then confirmed, in 2017, by the Swiss Federal Court in Lausanne, then by the European Court of Human Rights (ECHR), in 2020.

On the judicial level, Mr. Platini was first heard as a “person called to provide information” (assisted witness), in September 2015. He believed himself exonerated when his lawyers received, in May 2018 , a letter from the prosecutor, Cédric Rémund, explaining to them that the investigation was not aimed at their client. After prosecutor Hildbrand took over the case, the procedure was extended, in May 2020, to Mr. Platini.

Hundreds of firefighters fight against a “megafire” in the Gard, “still...