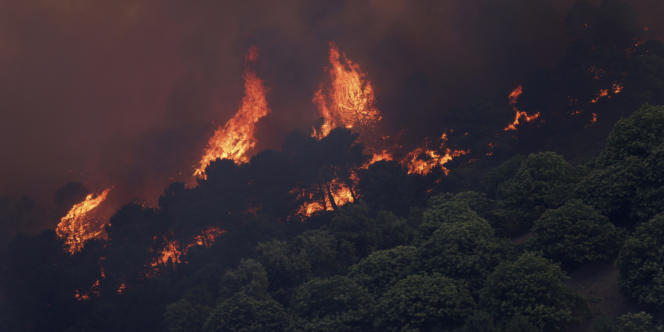 Firefighters continued Saturday, June 18, to fight fires in Spain, on the last day of an extreme and unusually early heat wave.

The most important of these forest fires was still out of control at the end of the afternoon in the Sierra de la Culebra, a mountain range in the region of Castile and Leon (Northwest), near the border with Portugal. According to regional authorities, “19,765 hectares have burned” in this giant fire, which started Wednesday evening before spreading over the past twenty-four hours, fanned by high temperatures and the presence of a wind dry.

Eleven villages and several hundred people had to be evacuated in the face of the threat of the flames, which led to the closure of a national road and a high-speed train line between Madrid and the region of Galicia (Northwest) . “Nearly 500 professionals” are mobilized to extinguish this fire, including members of the Emergency Military Unit (UME), specializing in this type of intervention, said the regional government of Castile and Leon on Twitter.

In Catalonia, the situation is “very complicated”

Spanish firefighters also continued to fight several fires in Catalonia, notably in Artesa de Segre and Baldomar, in the province of Lérida, where the fire destroyed more than 2,000 hectares of forest. The situation is “very complicated”, recognized on Twitter the Catalan firefighters, when a new major fire broke out on Saturday afternoon in Olivella, near the natural park of Garraf.

In Navarre, another forest fire led to the evacuation of nearly 2,500 people from the Sendaviva zoo and amusement park. “Animals in the park” remained indoors but “are out of danger,” area firefighters assured on Twitter.

On Friday, another fire near Toledo, in the Castille-la-Manche region (Center), led to the evacuation of 3,200 people from the Puy du Fou Spain amusement park. This historic theme park, a subsidiary of the French Puy du Fou, inaugurated in March 2021, finally “reopened its doors” on Saturday, according to management, the fire having been brought under control by the emergency services.

This series of fires comes as Spain has been facing a very intense and unusual heat wave for a week, considered by scientists to be a consequence of global warming.

According to the Spanish Meteorological Agency, very high temperatures were again recorded on Saturday, especially in San Sebastian, in the Basque Country (43.5°C), and Zaragoza, at the foot of the Pyrenees (42°C).

In northern Italy, Lombardy is preparing to declare a state of emergency in the face of a record drought threatening crops, and water is already rationed in several towns in the Po plain. This region is facing its worst drought for seventy years.

The United Nations (UN) called on Friday to “act now” against drought and desertification in order to avoid “human disasters”. “It’s time to act: every action counts,” said the Executive Secretary of the United Nations Convention to Combat Desertification (UNCCD), Ibrahim Thiaw, during a conference in Madrid on the occasion of the World Drought Day.

This heat wave, which also affects France, should end on Sunday, thanks to a colder air mass coming from the West, according to Aemet.

Spain, which this year experienced its hottest May since the beginning of the century according to the meteorological agency, has already gone through four episodes of extreme temperatures over the past ten months, including the current heat wave.