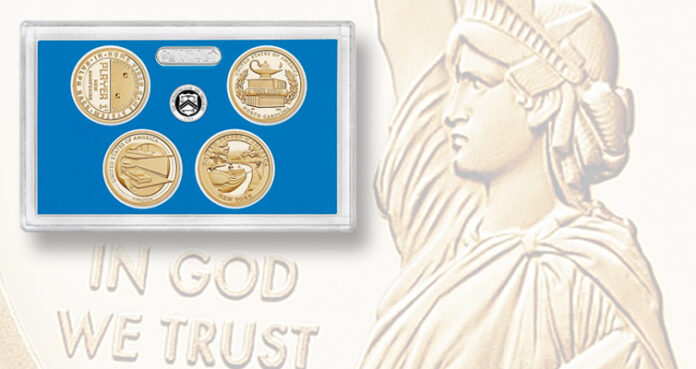 According to the Mint’s Oct. 17 sales report, the total number of sets sold increased to 53,115.

The sets are offered at $24 each, without a product limit or any household order restriction. Each set comprises Proof dollars struck at the San Francisco Mint with the S Mint mark and bearing reverse designs illustrating innovation in the states of New Hampshire, Virginia, New York and North Carolina.

The coins are produced on polished, manganese-brass-clad planchets with laser-frosted, raised devices contrasted against mirrored fields, providing a cameo effect.

The reverses are paired with the common obverse for the 57-coin series, which depicts the Statue of Liberty.

The series comprises coins with reverse designs representing inventions or innovation in each of the 50 states, the District of Columbia, and the five U.S. territories — the Commonwealth of Puerto Rico, Guam, U.S. Virgin Islands, American Samoa and the Commonwealth of Northern Mariana Islands.

The series kicked off in 2018 with a single introductory issue; in 2019, the program began an annual issue of four American Innovation dollars, in multiple finish and packaging options.