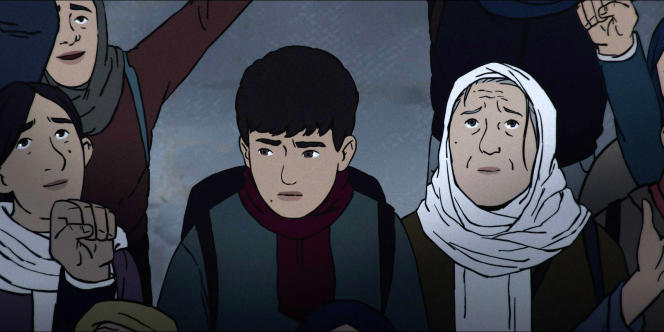 During the last campaign for the Oscars, Flee (“flee” in French) was nominated three times, in the categories documentary, animated feature film and international feature film, which partly draws the contours of this work that stands slightly apart from the abundant filmography born of population movements in the 20th century.

By choosing animated images to stage the story of Amin, who left as a child from Afghanistan and arrived in Denmark as a teenager, Danish director Jonas Poher Rasmussen opened up a poetic space to this story of exile, loss and reconstruction. . Far from being only the symbolic figure of a just cause or a social problem, Amin is both person and character, a wounded man in whose intimacy we advance, in the footsteps of the filmmaker.

Jonas Poher Rasmussen met Amin (not his real name, and one of the issues of the film is the revelation of the reasons for this anonymity) in the 1990s, when they were both high school students in Denmark. Having become a documentary filmmaker, the first very early on asked the second to tell him his story. It took more than a decade for the young man, who had become a renowned academic, to agree to give himself up. And we will understand, over the sequences, the reason for this reserve, which hides a literally unspeakable secret, so much does it jeopardize the very existence of the one who holds it.

On screen, Amin will perform this unveiling lying on a multicolored bedspread, framed as if a camera was placed above his face. This psychoanalytical installation speaks well of the director’s desire to build his film around words.

As Amin recounts his memories, the images change in texture. The most traumatic moments are treated in monochrome, with unstable contours, everyday life in the mode of a more traditional, polychrome, relatively fluid animation. Everyday life in Kabul before the disaster, when Amin was a little boy who liked to wear his sisters’ dresses. Everyday life in Copenhagen where one who has joined the intelligentsia hesitates to marry his companion. Added to this are some archive images that show both a congress of the People’s Democratic Party of Afghanistan (pro-Soviet) and a detention center in Estonia.

These last elements give an idea of ​​the itinerary of Amin, his four siblings and his mother. For them, the nightmare begins a little earlier than for the majority of Afghans, when their father and husband disappears after his arrest by the police of the USSR-backed government. The rise to power of the Taliban ended up pushing them into exile, in the Russia of the first post-Soviet years. One of the film’s most harrowing sequences is built around archival footage showing the inauguration of Moscow’s first McDonald’s; current movements in history give it an even more sinister resonance.

If this story grabs like the most vigorous of dramas, its political significance is not stifled. Denmark, which welcomed Amin some 20 years ago, has closed its doors and put the immigrant population under heavy pressure. As for the refugees who try to reach Europe by its eastern side, like the protagonist of Flee, they must now add war to the list of obstacles – xenophobia, greed, corruption – that stand in their way.