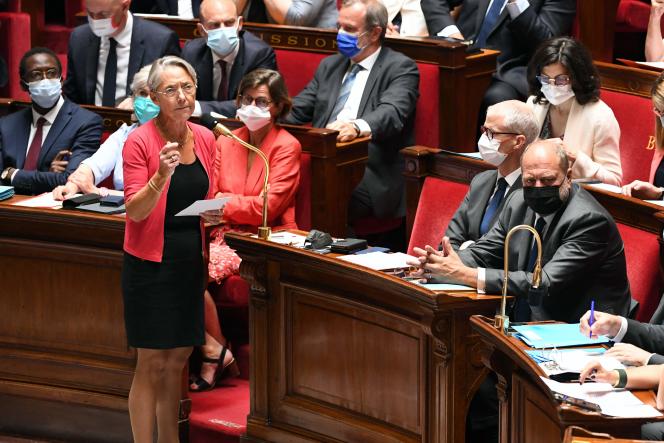 Security, “Uber Files”, purchasing power and hospital on the menu: the first questions to the government (QAG) of Elisabeth Borne gave rise on Tuesday, July 12, in front of the Assembly, to a few flare-ups of tension, in a stirring hemicycle . Deputies newly elected as new ministers appeared quite sure of themselves, during this hazing-like session – the words of each other being disturbed sometimes by the presidential majority, sometimes by the opposition. “We’re not in a protest!” “said the President of the National Assembly, Yaël Braun-Pivet.

At the head of the first opposition group, Marine Le Pen (National Rally, RN) launched the QAGs at 3 p.m., returning to the Interior Minister’s proposal to expel “any foreigner” who “has committed acts serious”: “I welcome this step towards us”, first declared the far-right leader, before asking the government if it intended to enforce the obligations to leave the territory.

“I will not seek the votes of the National Rally,” replied the Prime Minister, while the far-right leader was chatting with her neighbor Sébastien Chenu. “There will always be something that will come between us, it’s called values,” added Elisabeth Borne, applauded by the majority. Ms. Le Pen gave him a pointing zero sign in return.

The Renaissance deputy (ex-La République en Marche) Benjamin Haddad immediately shifted to security, under the “hello, hello” of the opposition who believe that the question was “telephoned” by the government. “What are the first two topics raised by the RN and the Macronie in questions to the government? Xenophobia and security (…). The deadly shallot race is on,” commented the “rebellious” Danièle Obono on Twitter.

In the process, his colleague from La France insoumise Danielle Simonnet brought the iron to the subject of the revelations of the International Consortium of Investigative Journalists (ICIJ) and forty-two partner media, including Le Monde, on the past links between Emmanuel Macron and Uber: “Here is the state scandal” with “secret deals in Bercy”, denounced the elected LFI. Olivia Grégoire struggled to answer him. “They’re screaming!” “, she protested to the President of the Assembly. The then Minister of the Economy “did his job” and received Uber like Netflix or BackMarket, she judged, before assuring: “These players are at the heart of today’s economy. today. »

The questions then followed one another on the bill devoted to purchasing power – “Give the money back to the French”, pleaded the elected LR Fabrice Brun. “If we add up all the requests you make, it’s 100 billion euros, the VAT would have to be doubled to finance your project”, exclaimed Gabriel Attal, Minister Delegate for Public Accounts, before continued: “You accused us of wanting to burn the bank, but you want to break the bank!” »

“Our healthcare system is sick”

The hospital’s situation was also discussed as it suffered a “hemorrhage of resignations”, according to the Socialists. The new Minister of Health, François Braun, found himself on the grill several times. The emergency crisis will not prevent the French from finding “always a carer to take care of them” and “direct them to the best solution”, at the hospital or elsewhere, he said, questioned by several deputies. “Our healthcare system is sick, our healthcare system is hurting, we have to recognize that,” he said.

Questioned by the deputy (PS) of Finistère Mélanie Thomin, in particular on the “insufficient” proposals of the “flash mission” carried out just before his appointment to the ministry, Mr. Braun admitted that these were “not solutions which will solve all the problems” and denied any desire to “close emergency services [or] prevent our citizens from accessing them”. “That’s totally wrong. Our fellow citizens will not find the door closed, they will always find a carer to take care of them and redirect them, ”assured this professional emergency physician.

Despite the tensions, “vital emergencies will always be ensured at any point in the territory”, insisted the minister again in response to the deputy (Horizons) of Calvados Jérémie Patrier-Leitus, who noted several cases of night closures in his department. “My mission is to allow each French person to be taken care of adequately”, which “does not necessarily mean in an emergency department”, said Mr. Braun.

As the Hemicycle gradually emptied, a new highlight came with the speech of Rachel Keke (LFI), the first elected chamber maid. “My comrades” who work in hotels, airports, “all are asking for a salary increase” and “this government doesn’t seem to hear it,” she said, briefly raising her fist. “It’s not with bonuses and checks that you pay your rent,” assured the MP, greeted by a “standing ovation” from elected officials on the left.

Olivier Dussopt, Minister of Labour, Full Employment and Integration, replied: “We are experiencing inflation that we have not experienced since 1985 and, faced with this inflation, the government is acting with a tariff shield, acting with aid for the most vulnerable households and the purchasing power package, which is proposed for your consideration by your Assembly, represents a commitment of 30 billion euros”. “Legislatures pass, your group does not change: you are in the incantation, we are in the action,” said Mr. Dussopt.

In turn, Jiovanny William, Martinican deputy of the Democratic and Republican Left group, questioned the minister in charge of overseas territories about Sargassum seaweed, during questions to the government, at the National Assembly. “By simply allocating derisory funds, you are not providing any solution adapted to the scale of the phenomenon,” he said.

Jean-François Carenco replied that the government was “aware of the extent of this phenomenon and its numerous impacts on biodiversity, on tourism, on the living environment, and especially on concerns about gas emissions [ sargassum]”. “The ministries concerned, in conjunction with the [regional health agencies] and the prefects, are looking into possible measures to be taken urgently, particularly in terms of informing pregnant women and providing protection,” said Mr. Carenco, touting “the ‘Sargasse-II’ plan, with a budget of 36 million euros dedicated this year”.

“But the subject is not finished, and we still have to work, that’s why at the request of Minister Darmanin I will go to Martinique and Guadeloupe next week,” announced the minister in charge. from overseas.

The two-hour session had only one brief moment of agreement, thanks to an intervention by Boris Vallaud (Socialist Party) on Ukraine. This conflict has been going on for “five months” and “we can pay tribute” to the Ukrainian people, the Prime Minister invited, before all the deputies stood and applauded.