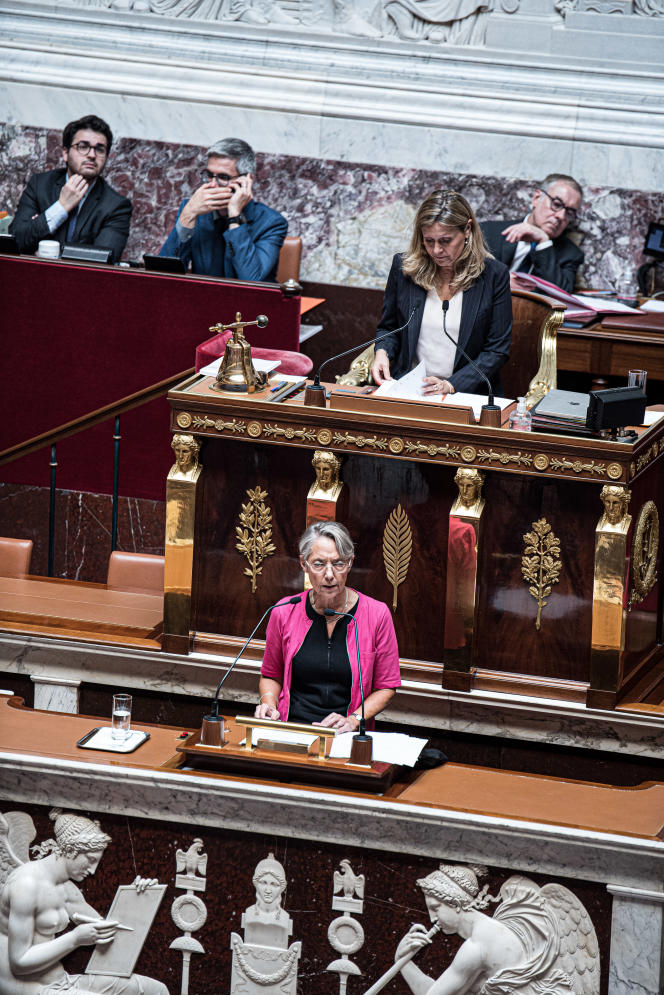 There were the words of Elisabeth Borne that resonated strongly. “Faced with the challenge, it is no longer a question of opposing the radicals to the partisans of an ecology of small steps (…). This word “radicality”, I therefore take it on my own. We will undertake radical transformations in our way of producing, of housing, of moving around, of consuming. ” Or, in conclusion of his general policy statement to the deputies, Wednesday, July 6: “France, our France, is that of this youth who puts us before our responsibilities, is committed to the climate, ready to fight for our common destiny. »

Beyond that, the first minister in charge of ecological planning did not really meet the expectations that this new name for a head of government could arouse. The challenge of “the ecological emergency” came only third in his speech, after “the urgency of purchasing power” and the challenge of “a society of full employment”. “For a prime minister in charge, on paper, directly of the ecological transition, it was not her number one priority. She responded to other emergencies that I do not dispute, but she did not announce anything concrete. She promised more actions, but we have been told that for five years, ”denounces Jean-François Julliard, director general of Greenpeace France.

Before the National Assembly, Elisabeth Borne took up all the themes developed by Emmanuel Macron in his speech between the two rounds of the presidential election, in Marseille, on April 16. For an ecology synonymous with economic development, claiming not to believe “for a moment that this climate revolution goes through degrowth”. Its ecological revolution is based on “innovations, new sectors, jobs of the future”.

“Getting out of fossil fuels”

Few announcements, therefore, but confirmations, including the expected one of “the State’s intention to hold 100% of the capital of EDF”, of which it currently owns 83.9% of the shares. “This development will enable EDF to strengthen its ability to carry out ambitious and essential projects for our energy future as soon as possible,” said the head of government. For Mr. Julliard again, this announcement corresponds first to “the need to bail out a company in great difficulty, with in particular twenty-nine out of fifty-six reactors shut down”.

The choice of nuclear power was reaffirmed by Elisabeth Borne, i.e. a “carbon-free, sovereign and competitive energy”. As well as, without further details, the deployment of renewable energies and the need to “consume less”. The Prime Minister also announced that, “as of September”, a “vast consultation” would be organized “with a view to an energy-climate orientation law”.

Another confirmation of a presidential promise, that of the establishment of a long-term rental system for “zero emission” vehicles, at “less than 100 euros per month”.

The Prime Minister also reaffirmed the objective of France becoming “the first ecological nation to get out of fossil fuels”. Words that make Anne Bringault, program coordinator for Réseau Action Climat (RAC) jump: “When she says this, she is only referring to electricity, while fossil fuels represent 70% of our consumption if the we take into account cars, heating or industry. For the RAC manager, “Elisabeth Borne announces things and does the opposite the next day”. In the crosshairs, title 3 of the purchasing power bill, which was to be presented to the Council of Ministers on Thursday July 7. It announced the reopening of the coal-fired power plant in Saint-Avold (Moselle) and the confirmation of the construction of a floating LNG terminal in Le Havre. At Matignon, we confirm the two measures, but we insist on the punctual side of the revival of the Moselle power station and the obligation for its operator, GazelEnergie, to offset the emissions produced.

Not all associations are so critical. The president of France Nature Environnement (FNE), Arnaud Schwartz, says he is “rather satisfied”. “The Prime Minister reaffirms the ambitions of an ecological five-year term, as announced by the President of the Republic. “She declared her desire to associate civil society organizations, which suits us well, we who are used to dialogue at national and local level”, insists the president of FNE, while regretting that nothing has happened. has been said about the “need for stronger enforcement of environmental law”.

At the end of the session, responding to the interventions and criticisms of the presidents of the parliamentary groups, Elisabeth Borne welcomed the widely shared “points of convergence”, including “concern for our planet”. For the rest, and the future of the reforms which will or will not put the country on the path of ecological transition, it is not certain that the Prime Minister will easily find the majorities necessary for the implementation of her policy.