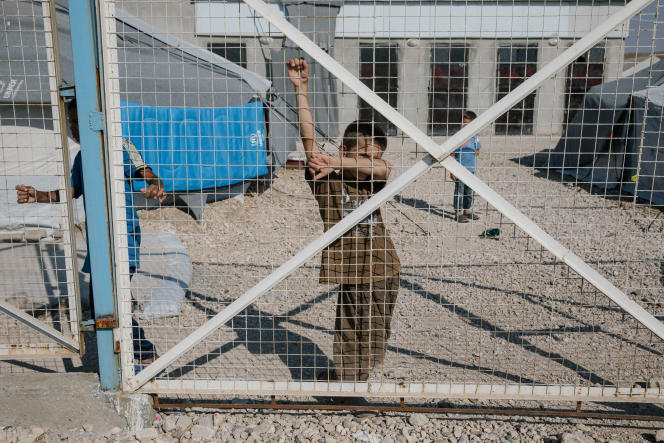 Two special planes, one of which is medical, chartered by the French government, landed on Tuesday, July 5, at dawn in Paris, with 16 jihadist women and 35 children on board, all repatriated from detention camps in the north of France. east of Syria. This is the largest repatriation operation carried out by the French authorities since the fall of the last stronghold of the Islamic State (IS) organization in March 2019, in Baghouz.

This collective repatriation marks a break with the “case by case” policy adopted so far by Paris, which consists de facto of bringing children back to national soil without their mothers, that is to say either orphans, or children whose mothers had agreed to sign a document renouncing their parental rights. Fearing being abandoned on the spot – or simply refusing to assume the legal consequences of their actions – the vast majority of mothers had refused, until now, to separate from their children.

Only 35 presumed orphan children had thus been repatriated by Paris, the last of which in January 2021. About 80 jihadist women and 200 French children were still detained in camps in northeastern Syria, before Tuesday’s repatriation.

Immediately after landing, the 16 mothers, aged 22 to 39, and the 35 minors were separated. Eight women and a 17-year-old minor were immediately taken into custody, mainly at the DGSI, where they are heard. They should be indicted by an anti-terrorism judge in the coming days and remanded in custody. Eight other women, subject to arrest warrants, were to be served with their indictment on Tuesday.

According to information from Le Monde, Emilie König, 37, one of the best-known French jihadists, is one of them. Regularly appearing in propaganda videos, she had been placed by the United Nations on its blacklist of the most dangerous fighters.

The children were taken care of by the Yvelines children’s social assistance (ASE). While their legal fate is entrusted to the Bobigny juvenile court, they will have to go through a long process of health and psychological evaluation, carried out, among others, by the Avicenne hospital, which has a unit specialized in psychotrauma, under the direction by Professor Thierry Baubet. The children will then be placed in foster families and monitored by the services of the ASE and the judicial protection of youth (PJJ).

What could have prompted such a reversal on the part of Paris? Among European countries, some 5,000 of whose nationals joined ISIS between 2013 and 2017, France was increasingly isolated in its choice of a “case-by-case” repatriation policy. Belgium, Finland, Denmark, Sweden, the Netherlands and Germany have decided to repatriate all of their children, accompanied by their mothers when possible. Thus, Brussels brought almost all of its nationals back to the country at the end of June.

The number of French nationals in the Syrian camps is much higher than that of other European countries. But the opening of a new radicalization assessment unit (QER) specific for women detained for terrorism, at the Rennes remand center this year, gives the prison administration increased reception capacities.

National anti-terrorism prosecutor Jean-François Ricard said last week on Franceinfo that the National Anti-Terrorism Prosecutor’s Office (PNAT) was ready to handle around 100 additional cases, corresponding to the number of women detained in Syria: “S’ we had to judge a hundred more people, we would know how to cope,” he said.

Another reason for the reversal of the Elysée, which manages this sensitive issue directly, is the multiplication of condemnations of France by national and international bodies. Thus, the Defender of Rights, in an opinion of April 29, had asked the government “the repatriation as soon as possible of all the French children detained in camps in the northeast of Syria”. “Seized since 2017 of complaints by their families, the Defender of Rights recalls that each day spent in these camps endangers the lives of these children exposed to inhuman and degrading treatment which engages the responsibility of the French State”, said the text, which recalled past decisions of 2019 and 2021 going in the same direction. On two occasions, the National Consultative Commission on Human Rights (CNCDH) issued opinions in favor of repatriation.

At the European level, the European Court of Human Rights (ECHR) must rule on the appeals filed by several French families of jihadists and detained children. A conviction by the ECHR would have tarnished Emmanuel Macron’s image in Europe. “We must believe that the president does not wish to go down in history as the one who left women and children to die in miserable camps in full view of the whole world”, explains a source familiar with the matter. On December 14, 2021, a 28-year-old woman, nicknamed “Maya”, died of diabetes in squalid conditions, leaving a 6-year-old orphan behind. Another woman, suffering from colon cancer and mother of four children, was on the verge of death on the spot. The latter was repatriated on Tuesday by air ambulance.

In early February, the UN Committee on the Rights of the Child found that France “violated the rights of French children detained in Syria by failing to repatriate them”. He denounced the “appalling” conditions on site, “putting their lives in danger for years”. Unicef, the UN agency dedicated to children, is also pushing for repatriation. The position of Paris, which made the protection of children in conflict zones its diplomatic priority of the moment, became untenable, while all the major human rights NGOs, such as Amnesty International and Human Rights Watch, condemned its position. . Pressure from Washington, which considers the Kurdish autonomous region unstable and impossible to secure in the face of Turkish intrigues, also weighed in the choice of the Elysée.

IS recruitment in the camps

The security situation has, in fact, deteriorated markedly since the reconquest of Baghouz by the Syrian Democratic Forces (SDF, predominantly Kurdish) in March 2019. The jihadist group has reconstituted sleeper cells and is in the camps and prisons North-East Syria, a fertile ground for radicalization and recruitment. The proliferation of escapes, but also criminal acts, including assassinations, within the Al-Hol camp, which houses nearly 60,000 detainees, had decided Paris, in the summer of 2020, to transfer almost all of the French women and children in another camp, that of Roj, considered “safer”.

The attack carried out at the end of January by the Islamic State organization against the Ghwayran prison, 200 kilometers to the south, in the province of Hassaké, again sounded the alarm. It was only after more than a week of fighting that Kurdish forces, aided by American units, succeeded in regaining control of the prison, at the cost of nearly 500 deaths and the escape of a unknown number of jihadists. The FDS had urged their international partners to repatriate their nationals detained in the camps, which have become a real “ticking time bomb”.

On the French side, the timing also lent itself to such an operation, once the electoral deadlines had passed and the trial of the attacks of November 13, 2015 had been completed. Especially since public opinion no longer makes terrorism its main concern, even if the subject remains inflammable, especially in the political arena. In March 2019, a repatriation operation was ready, as the Minister of Justice at the time, Nicole Belloubet, had announced. It was canceled at the last moment, following leaks and the publication of a poll in which nearly seven out of ten French people said they were firmly opposed to the repatriation of the children of jihadists.

In-depth work has been done by the tireless lawyer Marie Dosé, who represents several of the women detained in the camps. Often accompanied by her colleague Ludovic Rivière, she organized several trips on site with elected officials from all sides, public figures or representatives of the Paris Bar. Above all, she convinced many personalities from the world of culture (Jacques Doillon, Sophia Aram, Carole Bouquet, Charles Berling, etc.) to sponsor detained children. During its last press conference, on May 23, the association of victims of November 13, 13onze15 defended the solution of the global repatriation of women and children.

“This repatriation is as inexplicable as the case-by-case policy, which for children is inhumane, deplores Me Ludovic Rivière. It comes really too late. They could have already repatriated them in 2020, in 2021. We have created damage in these children that will be difficult to repair, despite the work of educators and the support of families. We made them lose years, made them live through deep trauma. The lawyer now pleads for the rapid repatriation of the other French women and children who are still in the camps in northeastern Syria.