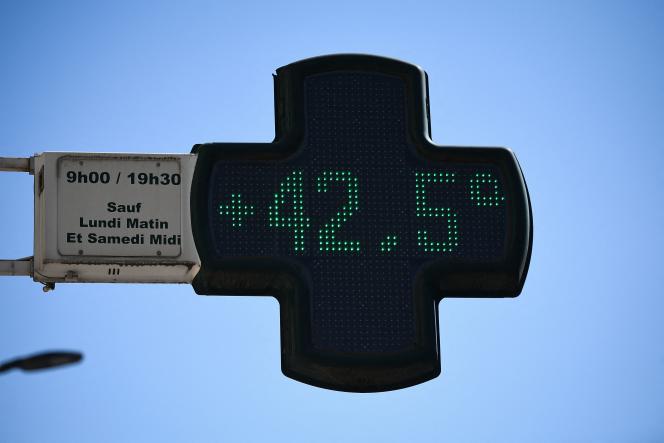 A new wave of heat, which has become a heat wave, hits France. This is the 45th heat wave recorded in France since 1947; it officially started on Tuesday, July 12. It is particularly intense and long-lasting, especially in the southern regions, where fires have devastated more than 10,000 hectares in Gironde.

“Monday will mark the culmination of this heatwave episode on the western side of the country with an extreme peak of heat: 40°C will often be reached or exceeded, in the departments on red alert. Absolute temperature records will most certainly be broken,” warns Météo-France. Here are the forecasts for the next few days:

Monday could be one of the hottest ever recorded in France. “In some areas of the Southwest, it will be a heat apocalypse,” François Gourand, forecaster at Météo-France, told AFP. “There are a lot of records expected [Monday]: in Brittany, with maybe up to 40°C in Brest”, which would be an absolute record, but also in the Landes, where “the Landes forest will be au- above 42°C,” said forecaster Olivier Proust during the press briefing.

The night from Monday to Tuesday will be scorching in all departments in red: “We’re going to have a really hot night”, with minimums not dropping below 25 or 26°C at the coolest of the night, added Olivier Proust.

The intense heat is fanning the fires, which have multiplied in recent days. Sunday evening, the fire in Gironde regained ground thanks to swirling winds. It devoured 15,000 hectares of vegetation, the prefecture said Monday morning.

As a corollary to this heat wave, peaks in air pollution could appear. A deterioration is expected on Monday concerning the concentrations of ozone, already sustained, in particular on the Atlantic arc and Provence-Alpes-Côte d’Azur, according to Prev’air, the national platform for forecasting air quality.

On Tuesday, “the significant drop in temperatures by the Atlantic is confirmed” and red vigilance “should be lifted on the Tuesday map at 6 a.m.”, forecasts Météo-France. The high temperatures will shift over the eastern half of France, “most often between 37 and 40 ° C”. “A stormy deterioration is expected, especially marked at the end of the day, from the Massif Central to the north and the Grand-Est,” adds the meteorological organization.

On Wednesday, the hot weather will only affect the southeastern quarter of the country, “a situation that could last a few more days there”.