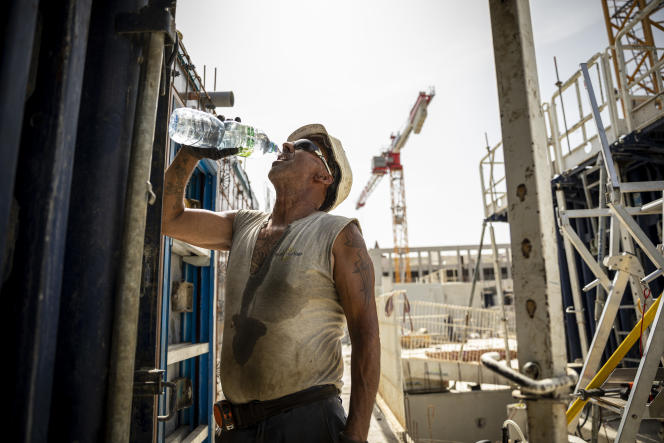 France passed, Saturday June 18, the peak of an intense heat wave episode and an unprecedented precocity. Biarritz experienced an “absolute” temperature record “all months combined” in the afternoon, announced Météo-France. The thermometer thus reached 41 ° C at 3 p.m. in the seaside town on the Basque coast, before it climbed again, settling at 42.9 ° C at 4 p.m., said Météo-France. The previous record, set on August 4, 2003, was 40.6°C.

The meteorological service noted on Saturday “peaks close to 42 or 43 ° C” everywhere in the South-West, with in particular 41.9 ° C in Cap-Ferret or 41 ° C in Biscarrosse, in the Landes, equaling the record 1968. At 3 p.m., Météo-France also recorded 40°C in Bordeaux, 39°C in Angers, Auch, Auxerre, Châteauroux, Niort and Mont-de-Marsan.

According to Météo-France, the country also experienced all-time records for “minimal” heat. With 23.5 ° C at its lowest on Saturday, it had never been so hot at night in Belle-Ile-en-Mer (Morbihan), erasing a record dating back forty-five years. In total, eleven departments were placed on red alert, before it was lifted Sunday morning at 6 a.m. by Météo France:

According to this same bulletin, valid until Monday 6 a.m., 50 departments remain on orange alert, from the German border to Morbihan via Ile-de-France, the center of the country and the Lyon region. In all, nearly three-quarters of the population, or 45 million people, remain affected by these alert levels.

Thunderstorms are expected in the evening over the west and south-west of the country. These precipitations on the Atlantic coast are the “first fruits of a rainy-stormy degradation” scheduled for Sunday and which will “gradually reduce” the heat wave, the strongest heat shifting towards the east, with in particular up to 38 ° C expected on the northeast on Sunday according to Météo-France. Some of these thunderstorms may “prove to be quite strong, accompanied by a few gusts of wind and especially strong electrical activity”.

In the early evening, the southwest was already swept by a powerful westerly wind, the galern, causing the temperature to drop by around 20°C in half an hour. After reaching an absolute record, in Biarritz, of 42.9 ° C at 4 p.m., the thermostat had fallen to 23 ° C at 5:20 p.m., according to Guillaume Woznica, weather presenter on LCI.

In the same way, Keraunos, the French observatory for thunderstorms and tornadoes, notes that the galerne brought down the temperature at the tip of Socoa (Saint-Jean-de-Luz) from 41.6°C to 29.3° C in twelve minutes.

According to the explanations of Météo-France, a galern is “a meteorological phenomenon characteristic of the south-east of the Bay of Biscay, which takes place in the coastal areas of the Cantabrian Mountains and the Basque Country”. In France, the term designates a north-westerly wind on the Basque coasts.

In some cases, the galern may be accompanied by precipitation. It suddenly interrupts a period of calm weather, generally sunny and warm, continues the meteorological institute. Galerna generally occurs from May to October and the vast majority of the phenomenon takes place between 2 p.m. and 11 p.m. There is a galern three to four times a year on average (always in Biarritz), and most often lasts from one to three hours, the wind generally remaining in the west, again according to Météo-France.

In the departments on alert, on Saturday afternoon, the temperatures generally reached “between 37 and 41 ° C in [l’]Aquitaine, [le] Poitou-Charentes, [le] Center-Val-de-Loire, [ western Burgundy and [the] Ile-de-France” and neighboring peaks of 42°C or 43°C “measured locally in southern Aquitaine”. Elsewhere, in the Grand-Est, the Lyon region, Auvergne, the Rhône valley and a good part of Occitania, the maximum temperatures posted 35°C to 39°C.

This heatwave episode is accompanied by numerous temperature records, underlines the meteorological service: “We can cite Durban-Corbières, in Aude, where the thermometer showed 42.3°C” on Friday.

Many festive, sporting and cultural events have been canceled in departments classified red. In Lourdes (Hautes-Pyrénées), the pilgrimage of veterans, planned on the occasion of the anniversary of the appeal of June 18, 1940 by General de Gaulle, did not take place.

However, the heat did not prevent tens of thousands of people from attending Hellfest, the high mass of metal and other extreme music, in Clisson (Loire-Atlantique). By 40°C, the few shaded spaces of the site were stormed in the afternoon, like the water points and the metal structures hosing breathless but overexcited spectators who did not give up “pogotering In the middle of a dodger, noted a journalist from Agence France-Presse.

Faced with this heat which puts the most vulnerable in danger, the Minister of Health, Brigitte Bourguignon, visited an Ehpad in Vienne on Friday. “We are in a very early heat wave, a strong episode that lasts a little longer than expected,” she said, adding that “the hospital is obviously saturated, but meeting demand.”

During the electoral campaign in Calvados, the Prime Minister, Elisabeth Borne, insisted on prevention: “The urgency is really these instructions on the caution to be had with these hot weather which will last until the end of the week “.

Homeless people also suffer from the dangers of dehydration. In Toulouse, the Red Cross organizes patrols to distribute fresh water to them. “There are more deaths of people on the street in summer than in winter,” said volunteer Hugues Juglair.

Farmers must adapt. “I attack at dawn until 11:30 a.m., and then I can work in the evening, before nightfall,” says Daniel Toffaloni, a farmer near Elne (Pyrénées-Orientales). In his tomato greenhouses, the temperature can reach 55°C.

In Centre-Val de Loire, it is on the Indre-et-Loire that the heat wave weighs the most. Harvest fires are increasing there, with twenty hectares of fields going up in smoke. This department, like others, has become a “very severe” fire risk, such as Haute-Vienne, and the prefecture has banned agricultural work from 12 p.m. to 5 p.m.

In Aveyron (orange alert), firefighters continued to fight a fire that destroyed 140 hectares of vegetation in Comprégnac, with an unfavorable wind and on steep terrain. A hundred additional hectares could be threatened.

Many regions are also experiencing sharply increasing concentrations of ozone in the air, according to Prev’Air, which predicts that they will remain high “in the days to come”. Extreme heat also promotes the proliferation of cyanobacteria in bodies of water, leading to bans on swimming, water activities and fishing, such as at the Sesquières and Ramée lakes in Toulouse.

In Châteauroux, tap water is unfit for consumption for 25,000 inhabitants in the north of the city, after contamination by the bacterium Escherichia coli. Water consumption is now prohibited until at least Sunday 6 p.m., Châteauroux Métropole announced on Friday. The city has launched its municipal safeguard plan and set up, with the water network manager SAUR, four distribution centers for bottled water packs. Deliveries are planned for the elderly.