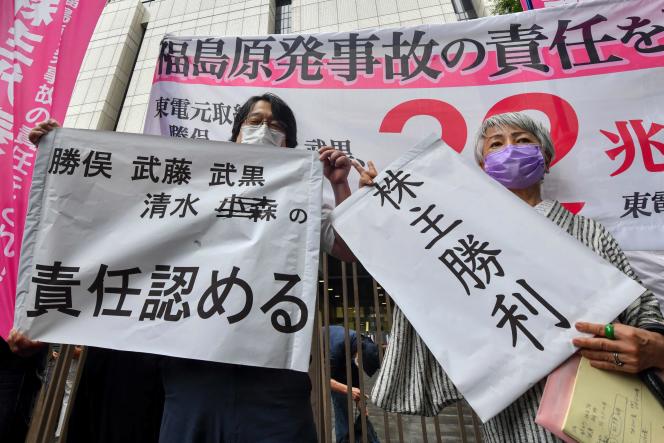 A Tokyo court on Wednesday (July 13) sentenced four former officials of the electricity supplier Tepco (Tokyo Electric Power Company) to 13,000 billion yen (95 billion euros) in damages. Justice believes that the electricity company failed to prevent the accident at the Fukushima nuclear power plant in 2011, according to local media. “The sense of safety and responsibility required for an operator of a nuclear activity was fundamentally lacking”, considered the judge, quoted by the Japanese public television channel NHK.

This decision is the culmination of legal proceedings launched in 2012 by Tepco shareholders. This is the first time that former leaders of the group have been held responsible for the Fukushima Daiichi disaster, which occurred after a gigantic tsunami.

As they left court, plaintiffs held up banners that read “Admitted Liability” or “Shareholders Won.” In a statement, they specified the total amount of damages ordered by the court.

The shareholders argued that the disaster could have been avoided if Tepco executives had heeded reports advocating preventive measures against a tidal wave, such as installing emergency power systems at a higher altitude. central, located on the edge of the Pacific Ocean, in the northeast of Japan.

Three of the plant’s six reactors – Units 1, 2 and 3 – were in operation when the tsunami, following a powerful underwater earthquake, struck on March 11, 2011. Their cooling systems failed when waves flooded the emergency generators, causing the cores of all three reactors to melt.

Hydrogen explosions had also occurred in reactors 1, 3 and 4, causing great damage. The work to decontaminate and dismantle the plant is expected to take several more decades.

“We once again express our most sincere apologies to the people of Fukushima and society at large” for the damage and concerns caused by this disaster, a Tepco spokesperson told Agence France-Presse on Wednesday. however, declining to comment on the court ruling.

Since the Fukushima accident, Tepco has faced numerous legal proceedings, including from residents who were forced to evacuate the region because of radiation, in sometimes very trying conditions.

In 2019, three former Tepco executives prosecuted by evacuees from the region were acquitted at first instance. These former bosses, exonerated at the time – the former chairman of the board of directors of Tepco Tsunehisa Katsumata and the former vice-presidents Sakae Muto and Ichiro Takekuro -, are among the four convicted in civil proceedings on Wednesday, alongside a another former executive of the company, Masataka Shimizu.