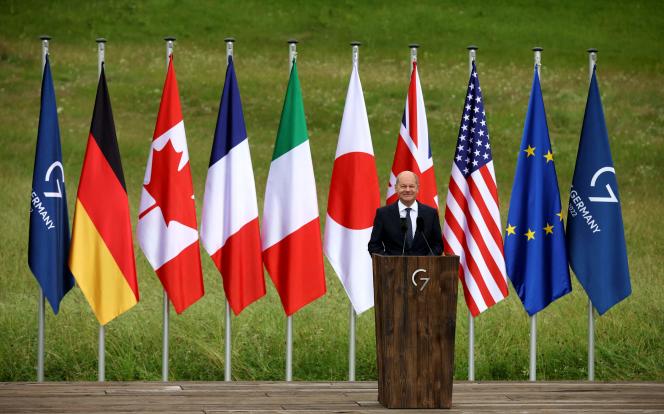 At the end of the summit in Germany, the leaders of the G7 denounced, Tuesday, June 28, “non-transparent interventions and distorting the Chinese market”. In a statement, they said:

Regarding China’s role in the global economy, we continue to consult on collective approaches, also beyond the G7, to address the challenges posed by non-market policies and practices that distort the global economy. .

In the document, G7 leaders condemn China’s unfair economic practices and pledge to address these non-trade practices by working together to “develop a coordinated approach to ensure a level playing field for businesses.” and workers”.

“Leaders will also discuss China’s role in the debt trap of low- and middle-income countries,” said a senior White House official, saying it was “a first for the G7.” .

Finally, the G7 will commit, continues this senior American official, to “accelerate progress in the fight against forced labor, with the objective (…) of eliminating all forms of forced labor from global supply chains, including state-sponsored forced labor, such as in Xinjiang, a Chinese province where Muslim minorities are subject to repression by the Chinese regime.

Creation of a “climate club”

The leaders of the G7 have also agreed on the creation of a “climate club” intended to strengthen and expand cooperation in the fight against global warming. This climate club will be an “intergovernmental forum of great ambition” open to all countries, explain the seven leaders. “We invite our partners, including major emitters, G20 members and other developing and emerging economies, to intensify discussions and consultations with us,” the statement continued.

This body aims in particular to bring together countries accepting common rules to avoid competitive disadvantages. These countries would jointly set ambitious targets and exempt each other from climate-related trade tariffs to which non-members would be subject. This would include agreeing carbon pricing standards or uniform regulations for green hydrogen.

At this stage, neither Japan nor the United States intends to introduce a national carbon price, but conservationists hope that a new momentum will emerge from this initiative.

Members of this club will “share best practices” in the fight to reduce CO2 emissions “including through explicit carbon pricing, other carbon mitigation approaches and carbon intensities,” the statement explains.

“There are different views on measures such as [carbon] pricing,” German Chancellor Olaf Scholz admitted at a press conference, wanting the club “not to be limited to the G7 [Germany, USA, UK, Japan, France, Canada, Italy] but includes many other countries”.

News Editor - June 28, 2022 0
The Italian Matteo Berrettini, finalist last year and who was one of the favorites of this edition, announced, Tuesday June 28 on Instagram, his...