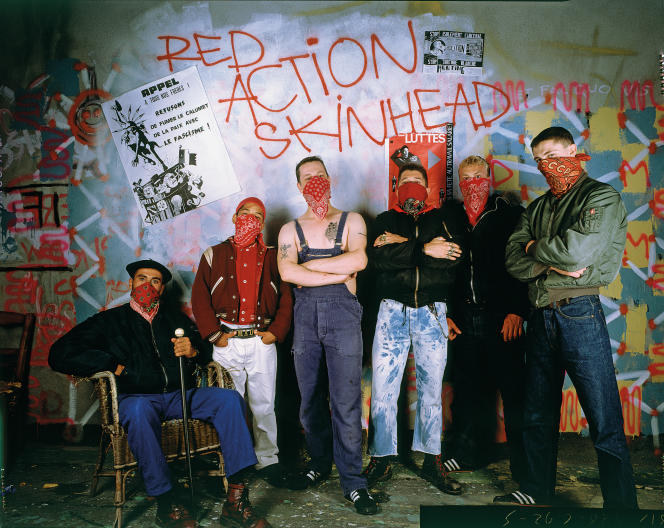 Khaki jacket, three-day beard and the look of an adventurer. Seeing Yan Morvan get off his scooter to enter a Parisian brasserie, you would swear he was coming back from a war zone. And, indeed, the photographer was still very recently covering the conflict in Ukraine, from the Russian side. He is in Paris to promote his book Gangs Story. Two hundred and twenty photos retracing almost half a century of gang history, most of them from the Ile-de-France region, brought together in a beautiful book of almost three hundred pages. The photos are accompanied by texts by Kizo. The latter, originally from La Grande Borne, in Grigny (Essonne), notably produced, in 2012, the documentary Gangs Story. He is also an actor.

Morvan is delighted. Glad that his photos are finally coming out in an opus with beautiful glossy pages: his book had, in fact, been withdrawn from bookstores in 2013 because a person appearing there did not wish to see his past as a neo-Nazi recalled. Also delighted to be able to return to what he calls “long-term sociological work”, of which the marginalized, the forgotten, the infrequent are the subject. Delighted, finally, to explain the process that occupied a good part of his life.

“My first photo report was in 1973, in Nice, in a slum where there were only North Africans,” he says, explaining the genesis of his work. At the time, Yan Morvan was a science student and hung around in leftist circles, between autonomous and Maoists of the Proletarian Left. The latter intervene in the slums to “raise awareness” of the immigrant masses and bring them to the class struggle. This report is a kind of trigger for the photographer. He continues: “I am then interested in young people, in black jackets, who are the sons of the first immigrants from the Maghreb. »

Over the years, he observes a break with the generation of the parents. Children are imbued with American culture, both in music and in cinema. These are the rockers, found in the first pages of Gangs Story. We also discover another variation of American culture: the bikers. Followers of the “three Bs” – for “fuck, beer and fight” – they lean seriously on the far right and are adept at provocation: swastikas and outstretched arms salutes are numerous, as seen on the shots taken in their intimacy, proof of the trust that Yan Morvan has won.

These first steps in the gangs are interrupted by the war reports of the photographer, who begins to work, in 1978, for Paris Match, Le Figaro magazine and prestigious photo agencies such as Gamma or Sipa. “I came back to Paris in 1986, and they told me I was too old, they made me do shitty subjects, explains Morvan today – at the time, he was 32 years old. I don’t want to continue and I’m going back to the gangs. First on radical far-right gangs, notably neo-Nazi skinheads, then on their antagonists, bands of skin “hunters” who went by the sweet names of Vicious Sharks, Black Dragons, Red Warriors or Ducky Boys. This is the heart of Gangs Story, this description of a counter-society, of a parallel world where an unknown “war” was being played out, that of the political margins.

The “Killer of Eastern Paris”

In the dozens of shots taken during these clashes, we discover the uniforms, the “colors” that the militants had to wear – a bit like in the film Warriors of the Night (1979), by Walter Hill. We meet a young Serge Ayoub, leader of the Parisian neo-Nazi skinheads. At the other end of the political spectrum, a mysterious and fascinating character: Yves known as “The Wind”, nickname given for his ability to disappear before returning, like a ghost. Morvan is the only one to have captured images of this Haitian immigrant, adept in martial arts and leader of the Black Dragons, a band from Nanterre who tracked down neo-Nazis, in the streets of Paris in the early 1990s.

The photographer also recounts the emergence of hip-hop at the same time. We thus see the very young Kool Shen and JoeyStarr of the Supreme NTM and the members of the A.M.E.R Ministry, Stomy Bugsy, Doc Gyneco, Passi and Kenzy or even Sté Strausz, one of the very first female rappers.

But the real surprise of the book comes a few dozen pages later with the passage on Parisian squats. Several photos include Guy Georges. The “killer from eastern Paris” was “guardian” of several occupied buildings, such as rue Didot in the 14th arrondissement of Paris, or rue Saint-Sauveur, in the 2nd. We see him eating a kebab or posing with fake Kalashnikovs.

The book ends with a section entitled “Sex, drug and money”. On the program: boxing training, barbecue and “pull and push” competition, or bodybuilding with street furniture as equipment. But also some drug deal scenes. “Today, money is the only motivation, laments Morvan. All the culture is American, we were eaten. In the cities, they are subject to permanent economic pressure. To get by, they have to be inventive. Some turn to drugs, others try to create something. The photographer continues: “There have always been misfits. The good old days don’t exist. We are in a Philip K. Dick novel, a dystopia where there are no more police, where people wander, where tribes are reconstituted and where the utopias of the 1960s are shattered. “Gangs Story tells the beginnings.

A France of the forgotten

It is both a journey through time and into the margins of society. Through 220 photos that run from the 1970s to the present day, Yan Morvan and Kizo retrace the still largely ignored history of bands of marginalized people.

Divided into four parts and following a chronological framework, this very beautiful book is punctuated by Kizo’s texts recontextualizing each era and Morvan’s photos which give them flesh. The book begins with the end of the “glorious thirties”, the arrival of immigrants from the Maghreb or sub-Saharan Africa, then continues throughout the 1980s and 1990s, which saw the appearance and massification of hip-hop ( as well through music, with rap, as with graffiti or dance), true cement of a youth whose references and landmarks come from the United States. Finally, the last part focuses on the early 2010s.

The choice to follow the course of time has an advantage: that of seeing, concretely, the decay of working-class neighborhoods and their abandonment. Morvan assumes the sociological aspect of his work as a photographer. He does not judge, he meets everyone to X-ray all aspects of a society that is increasingly fractured.

We therefore rediscover the rockers, the bikers, but also the squatters and the city bands of today. Sometimes political – as with the skinheads or the anti-fascists –, often lost, these young people tell of a France of the forgotten, that of large anonymous and impersonal groups, of the poor, of the underclass.

“1990s, gang clashes don’t stop because of some official ‘ceasefire’. Far from there. It’s more of a retreat. As in society as a whole, money becomes the main motivation for young people, the ultimate value. And above all, quick and easy money. In this they follow the example of some of their elders. Some members of the Junior Sharks had indeed already poured into the business. So some will do anything to become actors in an underground economy that can be summed up in three words: territory, drugs and money. Territorial control is essential to ensure the development of traffic. But not all young people go into business. We still often leave the gang for that. Traffic needs discretion and gangs are starting to be too well known to law enforcement. »Gangs Story, page 198