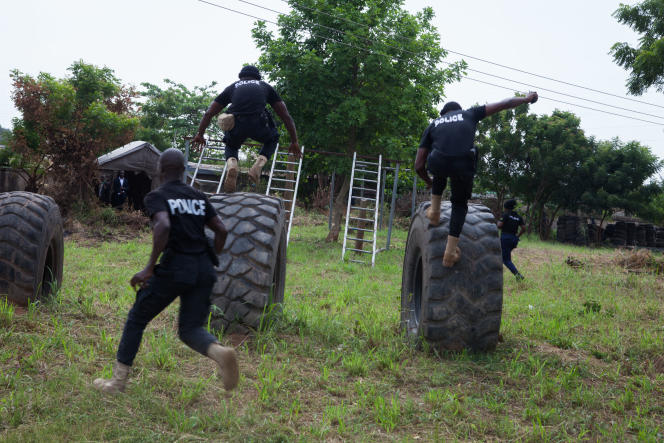 Is this the end of the Ghanaian exception? The only country in the Gulf of Guinea to have escaped terrorist attacks so far, the small West African country sees the threat getting closer. In its latest annual report, published on May 9, the West African Center for the Fight against Extremism (Wacce) is alarmed by the southward thrust of Sahelian terrorist groups. “This spread makes the situation in the border regions of Ghana extremely worrying,” the report warns in its preamble.

The areas that separate Ghanaian territory from the Cascades region of Burkina Faso and northern Côte d’Ivoire are indeed extremely porous. For the border with Burkina Faso alone, more than 189 unofficial entry points were identified in 2019 by the West African Network for Peacebuilding (Wanep). Many katibas from the Support Group for Islam and Muslims (GSIM) and the Islamic State in the Greater Sahara (EIGS) settled in the Cascades region during 2021, making northern Ghana an ideal fallback area. for armed groups operating in cross-border areas. Numbers with the Ghana area code (233) were thus found by the forces of the French operation “Barkhane” in the mobile phones of jihadists arrested in the Sahel.

Personal relationships or the outline of a recruitment pipeline? For the director of Wanep, Emmanuel Bombande, also a conflict mediator for the United Nations, the jihadists already have a foothold in Ghana. The diplomat said on May 10 in the local press that the country had become “fertile ground” for the establishment of terrorist groups. The threat is to be taken very seriously, he warned.

« See Something, Say Something »

In Accra, the National Security Council had already given the alert in 2016 after the deadly attack perpetrated in the seaside resort of Grand-Bassam, in Côte d’Ivoire, and claimed the same day by Al-Qaeda in the Islamic Maghreb ( AQIM). In an internal report, he estimated that “Ghana and Togo were the next targets after the attacks in Burkina Faso and Côte d’Ivoire”. What followed proved him right: in Togo, the security forces deployed in the north were attacked in November 2021 in Sanloaga, then on May 11 in Kpinkankandi.

In an attempt to ward off the danger, the Department of National Security launched with great fanfare on Tuesday, May 24, the nationwide “See Something, Say Something” awareness campaign. encouraging citizens to report suspicious activity to security agencies. But for now, the measure seems mostly cosmetic: the ministry says it received no fewer than 10,000 prank calls in the first 30 hours of launch. In addition, several deputies recalled that their conscriptions were essentially deprived of public lighting: difficult to spot potential illegal activities in the dark…

Ghana’s vulnerability is also due to the social discontent that has been rising in the country for several years. In 2021, a popular mobilization around the hashtag

According to a United Nations report on extreme poverty published in the spring of 2018, the contingent of millionaires (in dollars) increased from 1,900 to 2,900 between 2006 and 2016 and is expected to grow by another 80% by 2026. number of poor people, on the other hand, has remained almost the same over the last decade. Only 1.4% of the national wealth is devoted to social protection. The situation has further deteriorated since February with the outbreak of war in Ukraine and subsequent inflation. Fueling an all-terrain vehicle now costs 800 cedis (about 95 euros), the equivalent of the average monthly salary.

“There is a loss of confidence in the institutions, notes Festus Kofi Aubyn, regional coordinator at Wanep. The political class, perceived as corrupt, the police, who were able to commit abuses and human rights violations with complete impunity, in particular against militants of

The Wacce report also dismantles Epinal’s image of a Ghanaian haven of peace, to list the social conflicts that have remained unresolved: the resurgence of the dispute in Bawku, a municipality in the northeast plagued by recurrent inter-ethnic conflicts between Kusasi and Mamprusi related to chieftaincy and land ownership; separatist claims in western Togoland, in the eastern border region… So many flaws in national unity, experts point out, from which the katibas of the Sahel could benefit.

Aware of the deterioration of its security situation, Ghana has in recent years undertaken reforms of its administration and its defense apparatus. The administrative redistricting of its north has thus enabled the establishment of a tighter network of the territory, while new counter-terrorism units have been redeployed in the northern border areas. At the risk, as in Togo, of seeing terrorists attack these outposts to seize the stored weapons, test the resistance of the national defense and at the same time break the morale of the border guards, again unaccustomed to armed conflict.

The State also undertook in 2017 to develop sub-regional cooperation, in particular by setting up the “Accra initiative”, which today brings together seven countries (Ghana, Côte d’Ivoire, Togo, Benin, Mali , Niger, Burkina Faso) and whose secretariat is based in the Ghanaian capital. The system was then only preventive and aimed above all at the exchange of information. But Ghana now plans to carry out, alongside its allies in the sub-region, military interventions in Burkina, indicates a European diplomatic source. “As long as we stick to speeches, the threat can remain hypothetical, reminds our interlocutor. But the moment you commit to rooting out terrorist groups and deploying 1,000 or 2,000 men for a military offensive, you expose yourself. And when it comes to that, Ghana will become the official enemy of the jihadists. »