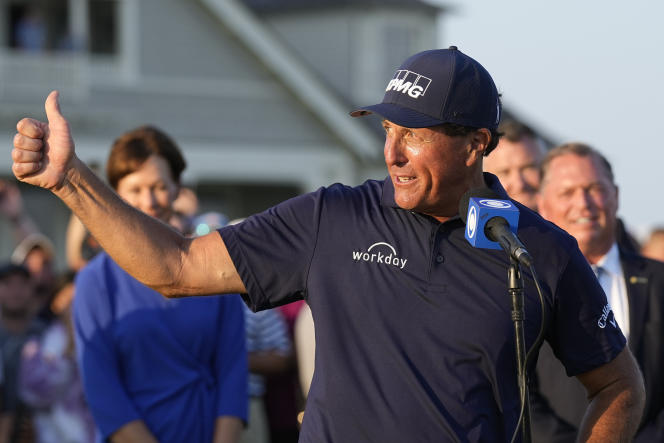 Former golf world number one Phil Mickelson confirmed Monday (June 6) that he has signed up with the breakaway Saudi-funded Super League (LIV), despite threats of sanctions from the North American PGA Tour . “I’m ready to start playing the game I love again, but after thirty-two years it’s a new start on a different path,” wrote the 51-year-old American, winner of six tournaments. adults, on his Twitter account.

In statements to the American sports magazine Sports Illustrated, the left-handed player also affirmed his intention to continue to play in major PGA tournaments. “I can’t wait to play the US Open”, one of the four grand slam tournaments, stressing that he understood from his discussions with the authorities of the PGA, that it would be possible for him. “Lefty”, as he is nicknamed, also made it known that he would remain a member of the PGA, unlike other players who joined the LIV.

“As we have told all of our members, on May 10, players affiliated with the PGA Tour were not allowed to participate in the tournament organized by the Saudi Golf League in London, in accordance with our regulations” , however, the body said in a statement dated June 1. “As such, members who violate this rule are subject to disciplinary action,” adds the PGA Tour in this text.

In a biography written by journalist Alan Shipnuck, Phil Mickelson explained that the “Saudi money” funding this new tour offered golfers a “leverage” to “get things done with the PGA”, while emphasizing the ” horrendous human rights record” of the Saudi kingdom. He later apologized and decided to “take a step back”, notably skipping the Masters and the PGA Championship.

Absent from the greens since he expressed his support for this project at the beginning of the year, while criticizing the leaders of the PGA Tour, he is on the entry list for the inaugural tournament of the LIV, which will take place from June 9-11 at the Centurion Club in St Albans, North London. The left-hander will notably be accompanied by former world number one Dustin Johnson, Spaniard Sergio García, and even British star Ian Poulter.

This event, like the others to come, provides for an endowment of 25 million dollars (about 23 million euros), more than double each of the four Majors. Not a single Professional Golf Association event offers so much money.

State corruption in South Africa: two of the Gupta brothers arrested in the United Arab Emirates

News Editor - June 7, 2022 0
Former golf world number one Phil Mickelson confirmed Monday (June 6) that he has signed up with the breakaway Saudi-funded Super League (LIV), despite...

The European Union has voted in favor of a universal charger...

Organized crime: “The traffickers who think they are untouchable must understand...