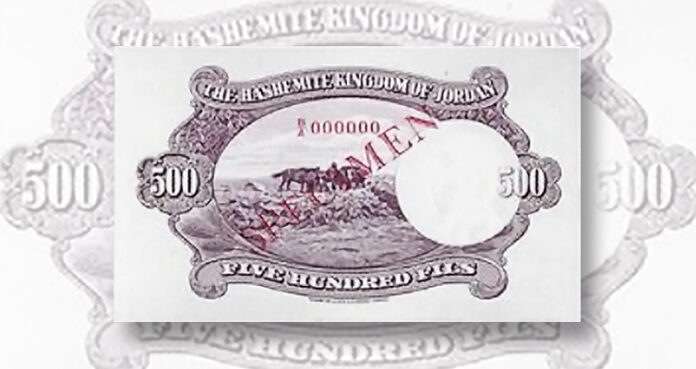 Five denominations dated 1949, printed by Thomas de la Rue & Company and released into circulation by the Hashemite Kingdom of Jordan were its first banknotes. The Kingdom has eight series of banknotes, with the most recent being introduced in 2002. Despite being small in size and easily available, many varieties are not readily available. There are also numerous specimens, color tests, serial numbers, and errors.

A dedicated collector started the Raqmu collection many decades ago. He initially wanted to build a basic set of type sets. Signature varieties, as well as different prefixes, specimens, and fancy serial numbers, were added later. It was almost complete with Pick number until 2002.

Highlights of the collection include a strong selection from the first and second issues. The later issues are almost complete, with the exception of a few small signature varieties. Modern sections have many single-digit serial numbers notes. This includes a Series 1995 serial number 1 note.

An original, intact specimen book from the second issue by de la Rue highlights a small number of specimens, proofs and color trials. Two specimens for each denomination are featured on the eight notes of a small leather book. They are pasted onto individual pages of the album. Although three decades of auction records don’t show any other offering of this book, some specimens of the same design suggest that at least three to five such books may have been made. The book is expected to sell for at least $12,500.

The majority of the collection was graded recently by Paper Money Guaranty.