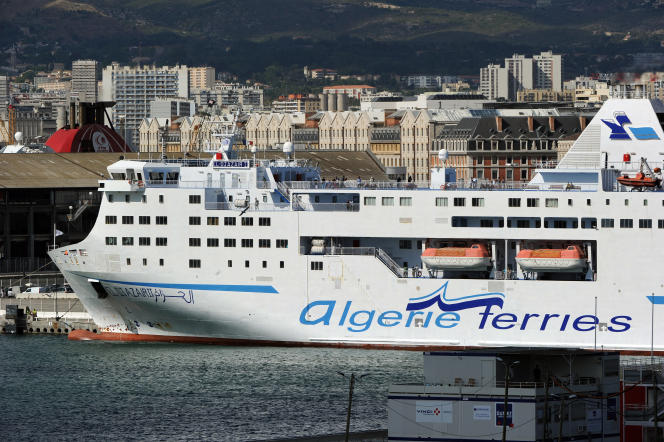 “You have to take a numbered ticket and wait your turn,” said a security guard posted in front of the Algeria Ferries agency in Marseille. A semblance of calm returned on Friday, May 27, near the premises of the Algerian national shipping company in Marseille. Two days earlier, the influx of customers desperate to book a boat for Algeria had nearly turned into a riot, prompting the intervention of the police. Two years after the closure of its borders due to the Covid-19 epidemic, Algeria is opening up little by little but not fast enough, believe its nationals and members of its diaspora.

At the entrance to the Marseille agency, the metal curtains have been lowered by half and agents are filtering the passages. About fifty people are waiting, standing behind barriers or sitting on folding chairs. “Some came last night and slept here to make sure they bought their ticket,” Abdelhamid said. This Algerian who lives in Marseille wishes to go to Algiers, but he is ready to embark for any Algerian city, “as long as I manage to leave”.

Armed with his ticket, he hangs around under the sun while waiting for his wife to come and take over when he has to go to work. “It’s a whole organization, but there’s nothing you can do about it, that’s how it is,” he said fatalistically. Like others, he has not been to Algeria for a long time. “It’s been two years,” he says. My mother is old and I want to see her. I even looked at the services between Alicante [in Spain] and Oran but there is nothing and the prices of the airlines are too expensive. »

In anticipation of the summer season, conducive to the return to the country of members of the diaspora and Algerians residing abroad, the Ministry of Transport announced on May 19 a strengthening of the maritime crossing program. Algérie Ferries and the private French company Corsica Linea have each been authorized to operate five additional weekly services, in particular between Marseille and the cities of Algiers, Oran, Bejaïa and Skikda.

But when ticket sales opened on May 23, huge demand derailed the reservation system. The websites of the two companies were quickly saturated. The heavy traffic – “200,000 connections per second” during the first two days of commissioning, specifies Algérie Ferries – caused major computer problems. Although the company claims that it is now possible to book online “safely”, travelers are still struggling to do so and are forced to go to agencies.

For several days, the scenes of endless queues and tensions have multiplied in front of the premises of the shipping company in Paris, Lyon, Lille and Marseille. “I was able to book tickets but I couldn’t pay on the internet, that’s why I’m here,” Selma explains. Sitting a few meters from the doors of the Marseille agency, this mother takes care of her two children while her husband waits in the long line.

If she favored the Algerian company, it was because she wanted to take advantage of the promotional rates announced recently. “The ENTMV [Entreprise nationale de transport maritime de voyageurs, of which Algérie Ferries is a commercial subsidiary] has lowered ticket prices by 50%, which explains this significant demand compared to other foreign companies”, indicated Karim Bouzenad , its commercial director, on the Algerian television channel Echorouk TV on May 24.

On her phone, Selma shows her reservation: a round trip for two adults, two children and a vehicle, all for 1,800 euros. An advantageous price compared to the prices charged by the airlines. While a round trip France-Algeria by plane cost around 300 euros before the pandemic, the price of a one-way ticket can now go up to 600 euros.

To get her places on board, the young woman did not save her strength. “I haven’t slept for three days,” she explains. She was able to complete her reservation at 4 a.m., when “the site works best because it’s less crowded,” she assumes. His anxiety now is that his tickets will be canceled if payment is not made quickly. This is why this binational residing in Manosque, an hour’s drive from Marseille, rushed to the agency.

To be able to meet the strong demand, the companies, dependent on the authorizations granted by the authorities, promise to work twice as hard. “Additional trips allowed provide three times the capacity,” Algerie Ferries said in a May 22 statement. A third ship capable of carrying 1,300 passengers and 450 vehicles is to be commissioned soon. The French company Corsica Linea should also charter a third ship in June with a capacity of 2,800 passengers.