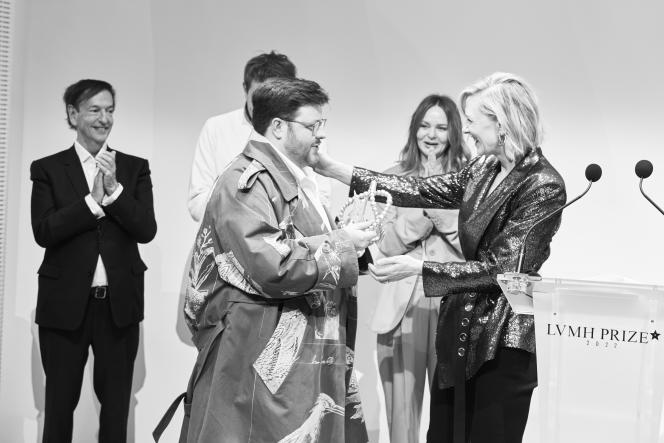 Cate Blanchett’s asymmetrical sequined jacket – branded Vuitton, of course – shines brightly on the beige catwalk. This Thursday, June 2, she is the guest of honor at the LVMH Prize and presents her trophy to Steven Stock Daley. The 26-year-old British designer, his cheeks burning with emotion, stammered into the microphone: “I didn’t expect this…”. Moments before, the “Karl Lagerfeld Special Prize” was presented by world champion freestyle skier Eileen Gu to two tied candidates, Eli Russell Linnetz (for his ERL brand) and Idris Balogun (Winnie New York).

This is the ninth consecutive year that the luxury conglomerate is organizing its fashion award, for which nearly 1,900 designers have applied. The eight finalists selected in March submitted their work to the members of the jury made up of star designers from LVMH (Nicolas Ghesquière, Jonathan Anderson, Silvia Venturini Fendi, Maria Grazia Chiuri, Kim Jones, Nigo), Jean-Paul Claverie (advisor to the CEO Bernard Arnault) as well as Delphine Arnault and Sidney Toledano (members of the group’s executive committee). The winner will receive an endowment of 300,000 euros, those of the Karl Lagerfeld Prize 150,000 euros each; all will benefit from a year of mentorship within LVMH.

“This year, it was difficult to decide, all the candidates had strong personalities, charm, were able to take us into their story,” said Nicolas Ghesquière, artistic director of Vuitton’s women’s collections. The winner Steven Stockey Daley (for his brand S.S. Daley), who is one of the youngest candidates, started in 2020, during confinement. “I had just graduated, and the only job prospect was to create my own brand,” explains the Liverpool native. His reinterpretation of English private school uniforms earned him a following on Instagram, a growing clientele, and scouting by pop star stylist Harry Styles.

“All my work is based on British heritage, details Steven Stock Daley. But I want to subvert his elitist image, look at him with my working-class gay eye.” In its collections, handmade in the United Kingdom from recycled fabrics, we find classic pieces such as the trench coat or the cardigan treated with a lot of fluidity, roundness, adorned with floral motifs and in soft colors.

The two winners of the special Karl Lagerfeld prize have in common to be Americans, and to be almost the same age. Eli Russell Linnetz, 31, is a designer-photographer-screenwriter based in Los Angeles; with his ERL brand, he has already collaborated with Dior Men, and offers clothing for men, women and children, sold in 85 points of sale around the world, including Comme des Garçons boutiques.

Opposite, the business of Idris Balogun (29) with his Winnie New York label is a little less developed, but based on solid foundations: the Nigerian-born designer apprenticed with the English tailors of Saville Row, is passed through the studios of Burberry and Tom Ford before launching his New York label rich in casual suits, admirably cut, brightened up with streetwear details and nods to the designer’s Nigerian heritage.

In addition to these rational and well-crafted proposals, there were among the finalists very couture collections (Ashlyn), sculptural pieces designed as works of art (Ryunosukeokazaki), daring textile experiments (Roisin Pierce), a wardrobe from the 2000 likely to appeal to Generation Z (Knwls) or militant clothing, bridging the gap between Nigeria and England (Tokyo James).

“The LVMH Prize is a photograph of creation at a given moment, it reflects its diversity. There have been couture proposals, others more commercial and wearable, analyzes Delphine Arnault, deputy director of Vuitton and creator of the prize. We reward those who have the most talent and potential to develop in the next ten years. In any case, all had integrated the environmental question. “To be a designer is to be aware of all aspects of creation, including asking how our work affects society and the environment,” says Idris Balogun. I don’t want to be part of a generation that will say to the following: the world was great before, but we broke everything! “.