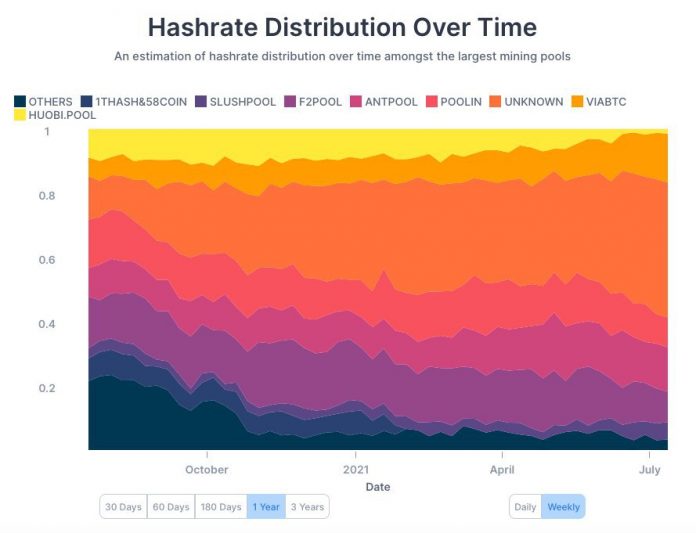 Data indicates that anonymous entities are becoming a larger force in the Bitcoin mining industry this year and last.

Bitcoin (BTC) has become considerably more decentralized in the past year, one metric suggests — and the trend is growing.

Despite a significant price rise over the past 12 months, Bitcoin miners are not becoming more corporate — mining is actually becoming more anonymous as smaller entities join in.

The trend in hash rate distribution is evident since the March 2020 crash. It has picked up pace this year.

The decline from $64,500 highs precipitated the shift toward smaller players. This is what would have been expected given a falling hashrate incentivizing them mine.

As Cointelegraph reported, meanwhile, the hash rate has stabilized over the past two weeks and begun reclaiming lost ground.

Analysis of revenues collected by the mining community as a whole underscores the recovery taking place, giving hope for the upward trend, which characterized the hash rate until May to resume.

At the time of writing, the hash rate totaled an estimated 95 exahashes per second (EH/s), up from the floor of 83 EH/s.

Many miners are “disproportionately sustainable”

However, future changes in miners’ business model will be centered on larger players. These larger players are growing in America and other countries in the wake the Chinese rout.

A slew of announcements this month, including one mining firm planning to go public in the U.S., combines with news that the industry’s environmental credentials are changing rapidly.

“So, the miners who are disclosing — and many of these are western miners exposed to capital markets in western countries — are disproportionately viable in their operations.”

Elon Musk, CEO of Tesla and SpaceX, hinted that Tesla may begin accepting Bitcoin for payments again in the coming months based on these environmental changes.