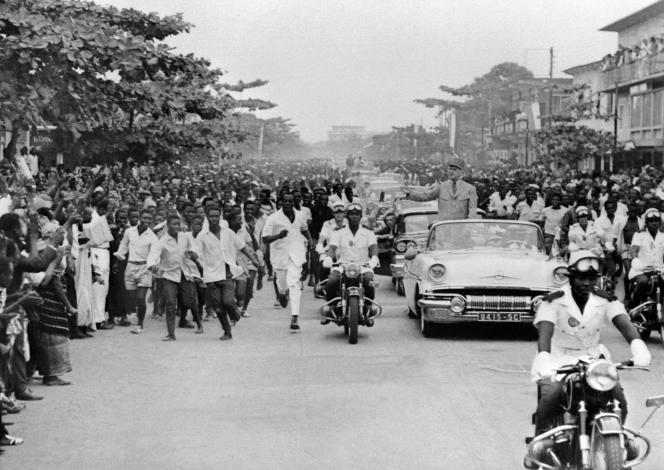 By asking Pap Ndiaye to be the referent on his series on African decolonization, Pierre Haski could not have foreseen that history would have fun shaking up the air: the historian has, in the meantime, been appointed Minister of national education and youth. If the geopolitical columnist of the morning of France Inter masters the subject well – he started in South Africa for the Agence France-Presse, before writing the Africa section at Liberation -, he notes that he is largely unknown, when well even “it is an integral part of our history”. He therefore decided to imagine a “hyperpedagogical” podcast. In fact, the bet is successful.

Each episode (eight in all) is built on the same principle: the story, taken care of by Pierre Haski, is both enriched with archives – which make it possible to illustrate the subject and to recall the context, sometimes terribly tense, like this August 25, 1958, in Conakry, Guinea, between Sékou Touré and General de Gaulle – and enlightened by a specialist, which allows and to take a little field and to air the narration. The production was entrusted to Hélène Bizieau: the one who was on the program “Sensitive Affairs” for a long time knows how to keep the attention of the listeners, even when the episode is long and the subject demanding.

“Link Between Yesterday and Today”

And that’s what, in the end, could define this series: the demand for the complexity of this story, of these stories. That of Sékou Touré, therefore, that of Félix Houphouët-Boigny (Côte d’Ivoire) and Kwame Nkrumah (Ghana), Léopold Sédar Senghor (Senegal) and Jomo Kenyatta (Kenya), Modibo Keïta (Mali) and Patrice Lumumba (Congo).

And Pierre Haski insists on the episode in Cameroon, where France “conducted a particularly violent policy of repression and, apart from a declaration, in veiled words, by François Hollande in Yaoundé, on July 3, 2015, there is no there is still no explicit recognition of the acts committed in the name of France in this country, nothing comparable to what happened in Algeria”.

In order not to be satisfied with a story sewn from the archives, Pierre Haski therefore sought “a scientific voice capable of making the link between yesterday and today”. Very quickly, it appears that the man for the job is Pap Ndiaye, “capable of bringing the historian’s perspective and perspective,” he told Le Monde. Pap is a specialist in the history of black diasporas, and many of the first African leaders lived part of their lives abroad: in this too, he was very valuable. Not to mention that he has a sense of proportion, he is always in the complexity of thought “.

It was therefore with the historian, then director general of the National Museum of the History of Immigration, that the first recordings were made, until this phone call, on Friday, May 20 in the morning. Pierre Haski remembers: “We had an appointment in the afternoon to record, and he called me saying he couldn’t come. Making me promise secrecy until the evening and the official announcement by the Prime Minister, Elisabeth Borne, he confides to me that he has been appointed Minister of Education. And tells me not to worry: he’ll find a moment to end the series. »

Result at the height

History will obviously decide otherwise. As Yann Chouquet, France Inter’s program director and podcasts manager, says: “When the news of his appointment broke, we were both proud and annoyed, because it is certain that, if he had been minister in exercise, we would not have gone to look for it. So it was quite “quickly and naturally” that the matter was decided: the first four episodes, already recorded, would be kept (with this warning to the attention of the listeners: “This program was recorded before the appointment of Mr. . Ndiaye to the government”), and other experts would take charge of the remaining four episodes. It is clear that, even if Pierre Haski had, in extremis, to find other speakers to complete his decidedly historic series, the result is up to par.

To be a smuggler of stories and history, to hope that this podcast will be listened to by young people and will make it possible to engage in constructive discussions, this is Pierre Haski’s wish. A pedagogical issue and a history of national education, in a way. And one of the missions of France Inter, which has taken over the niche: “For two years and the end of “La Marche de l’histoire”, Jean Lebrun’s program, we have sorely missed history. However, nothing like the podcast to do it, “explains Yann Chouquet.

The considerable success of the series signed Philippe Collin, detached from the antenna for the occasion (800,000 plays since the posting online, at the beginning of March, of that on Philippe Pétain), can only prove him right.